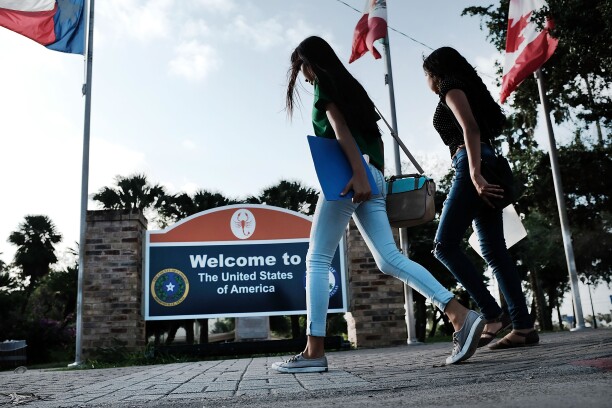 A sign welcomes people to the U.S. from Mexico on June 25, 2018 in Brownsville, Texas.
(Photo by Spencer Platt/Getty Images)

Big Law leaders are speaking out and stepping up in the wake of the Trump Administration’s recently-enacted, and then rolled back, policy of separating children from their parents at the southern border.

In a New York Times op-ed Monday, Brad Karp, chairman of Paul, Weiss, Rifkind, Wharton & Garrison, and Gary Wingens, chairman and managing partner of Lowenstein Sandler, called the administration’s current policy—which they characterized as prolonged detention of asylum-seeking families— “lawless” and said it will require “an army of lawyers to untangle.” Karp and Wingens wrote the op-ed on behalf of 34 law firm leaders.

“As a group, we cannot stand by as our government, under the pretext of enforcing the law, violates it and traumatizes children and their parents in the process,” they wrote. “We are professionally obligated to safeguard the rule of law and to protect the poor and the vulnerable against targeted governmental abuses.”

Since the Trump administration’s zero-tolerance policy was enacted in April, more than 2,000 children have been separated from their parents by U.S. Customs and Border Protection officials. Many of the affected families came to the U.S. to seek asylum.

Last week, President Trump signed an executive order with the purported aim of ending the family separations. Under the new guidelines, children will be kept with their parents “where appropriate and consistent with law and available resources,” according to the White House. Families will still be detained indefinitely, however, and it remains unclear how and how soon the already separated children might be returned to their parents.

On Tuesday, a federal judge in San Diego ordered the administration to reunite immigrant children and their families. The government has two weeks to return children under 5 to their parents, and 30 days for older kids.

“The continuing separation violates the constitutional guarantee of family integrity, which prevents the government from taking children from their parents without due process,” Karp and Wingens wrote.

In order to help families separated by CBP, Paul Weiss said it is working with the Refugee and Immigrant Center for Education and Legal Services and has sent “a team of lawyers” to Texas represent parents detained near the border.

Lowenstein Sandler has been working with the Vera Institute of Justice and the Young Center for Immigrant Children’s Rights to help represent separated children who have been brought to New York State.

Fried Frank, also a signatory of the op-ed, will be sending a group of volunteers to work on asylum cases handled by the Dilley Pro Bono Project in Texas, a firm spokesperson said. Firm lawyers will be representing mothers and children who have been detained at the South Texas Family Residential Center, helping many of them to prepare their asylum claims.

Meanwhile, another group of major law firms led by Kirkland & Ellis is launching Project Corazon, an effort to help reunite children taken from their parents under recent government immigration practices.

They are working with the non-profit Lawyers for Good Government Foundation, which plans to send some 60 volunteer lawyers to detention centers near the U.S. border to help detained parents prepare for government interviews, document the circumstances around their separation from their children, and help those still seeking information about where their children are currently located.

“Our overarching goal is reunification of families,” executive director Traci Feit Love said in a phone interview. The foundation was formed following the 2016 presidential election and provides legal services to “protect and strengthen democratic institutions, resist abuse of power and corruption, and defend the rights of all those who suffer in the absence of ‘good government.’”

Love said this week that 20 firms have agreed to participate in Project Corazon, and she expected another 15 or 20 would also join.

To contact the reporters on this story: Stephanie Russell-Kraft in New York at srussellkraft@gmail.com; Elizabeth Olson in in Washington at egolson1@gmail.com

To contact the editor responsible for this story: at ttaylor@bloomberglaw.com