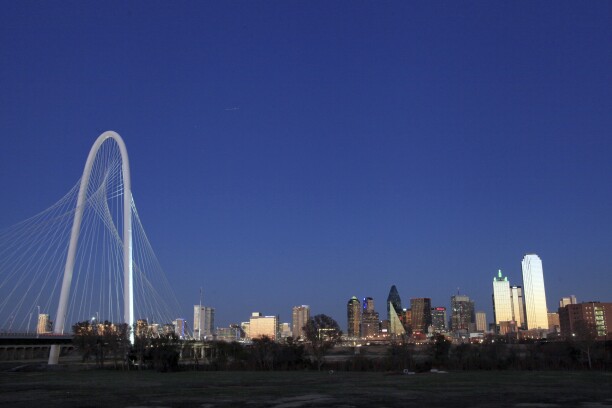 The Margaret Hunt Hill Bridge stands in front of the Dallas skyline in Dallas, Texas, on Dec. 17, 2013.
Photographer: Ben Torres/Bloomberg via Getty Images

Cole Schotz is expanding its ranks by adding a four-person litigation and intellectual property team in Dallas as firms continue looking to the Texas market.

The lift in commercial lawyer numbers has been pronounced in one of the Lone Star State’s other big cities, Houston. But Cole Schotz’s growth in Dallas indicates the city won’t be left behind as the energy and tech industries flourish in Texas.

More businesses and start-ups are finding the state a congenial place to set up shop. Texas has no state income tax and a lower cost of living than states on both coasts. The revival of the energy sector has also helped to push up demand for lawyers, and attracted big national law firms to offer their services.

Cole Schotz, a Hackensack, N.J.-based firm, is bolstering its position with experienced hires in the commercial and intellectual property areas. The firm this week added Aaron Davidson and Gary Sorden, who will be members of the firm —the equivalent of partners—and associates Brian King and Tim Craddock.

“The Dallas legal market is thriving. We are excited to be a part of this growth and to enhance the full range of practice area expertise we can offer our clients in this market,” said James Walker, managing partner of the firm’s Dallas office, which first opened in 2014.

“We handle a lot of intellectual property matters involving software, and some in hardware design,” said Walker. “Their hiring will be a complement to our IP practice.”

The firm, with 135 lawyers in Texas and New Jersey as well as New York, Delaware, Maryland, and Florida, is also looking to grow its corporate and real estate practices, Walker said.

Large-firm rivals also have been stocking their ranks in Texas. Kirkland & Ellis has grown its Houston office, which now has more than 200 lawyers, as energy markets flourish in the state and large infusions of private equity money fuel the markets.

But Dallas is not being neglected. DLA Piper recently brought aboard two new partners in the city, one with restructuring expertise and the other with corporate experience. Jones Day and Barnes & Thornburg have hired several partners in Dallas as well.

All four new Cole Schotz lawyers had been at Dallas firm Klemchuk LLP.