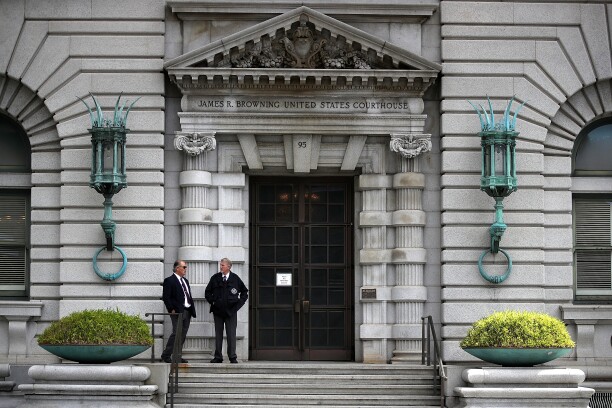 Two nominees for the California-based federal appeals court, one of whom received an unqualified rating from the American Bar Association, cleared the Senate Judiciary Committee Nov. 21, despite opposition from Democrats.

The Republican-led committee narrowly approved the nominations of Lawrence VanDyke and Patrick Bumatay to the U.S. Court of Appeals for the Ninth Circuit.

Both nominees, if confirmed by the full Senate, would add to the rising number of conservative judges President Donald Trump has appointed. Judicial appointments by Trump recently “flipped” a third federal circuit, which means seven appeals courts now have a majority of judges appointed by Republican presidents. There are 13 total.

VanDyke is a Justice Department lawyer who oversees federal litigation involving natural resources and is a former solicitor general in both Montana and Nevada. His “Not Qualified” rating from the ABA’s Standing Committee on the Federal Judiciary caused lawmakers to clash at his Oct. 30 confirmation hearing.

A scathing letter from the ABA panel that reviews judicial nominees reported that his peers called him “arrogant, lazy, an ideologue, and lacking in knowledge of the day-to-day practice including procedural rules.” The ABA also questioned his ability to treat members of the LGBT community fairly.

VanDyke and his Republican allies on the committee pushed back against that criticism.

Bumatay, a federal prosecutor, was nominated by Trump to judicial posts on two other occasions: First to the Ninth Circuit and later to a federal district court in California. The Senate didn’t act on either.

Prior to the committee vote, Democrats sought to defend the ABA ratings process from Republican critics who call the process biased against conservatives even though virtually all Trump nominees have passed its review.

Republicans previously launched partisan complaints about the standing committee member who led the VanDyke qualification review, Marcia Davenport, particularly over a donation she’d made to a political rival of his.

But Judiciary Chairman Lindsey Graham, who represents South Carolina, and Sen. Dianne Feinstein of California, the panel’s top Democrat, both revealed Nov. 21 that Davenport, a Montana attorney, actually recommended a qualified rating for VanDyke. It ultimately was a vote by the full ABA panel that resulted in the “Not Qualified” mark.

“Each member of this committee is free to decide how much weight to give to the ABA rating if any, but criticism of this evaluator are unfair and unwarranted,” Feinstein said.

Adam Russell, a spokesman for Feinstein, said the ABA conveyed the new details about the evaluation to the committee. And an ABA spokesman confirmed to Bloomberg Law that the information was accurate.

The panel also advanced three district court nominees. They were:

Also, Senate Majority Leader Mitch McConnell filed cloture, or a motion to end debate and advance the nominations, on eight other district court nominees. Four are from New York. McConnell is making an all-out drive to eliminate a backlog of federal judicial nominees this year, and set up votes for them in early December.

Even though McConnell has advanced 112 district court judges in Trump’s nearly three-year tenure, only one has been confirmed to fill a New York vacancy. In all, New York has a dozen vacancies, a number of them considered emergency openings.

In addition to the New York nominees, McConnell sought cloture on six other district nominees in states represented by Republicans.

—With assistance from Nancy Ognanovich

(Updates throughout with details on ABA evaluator rating and more information on nominees set for Senate votes.)