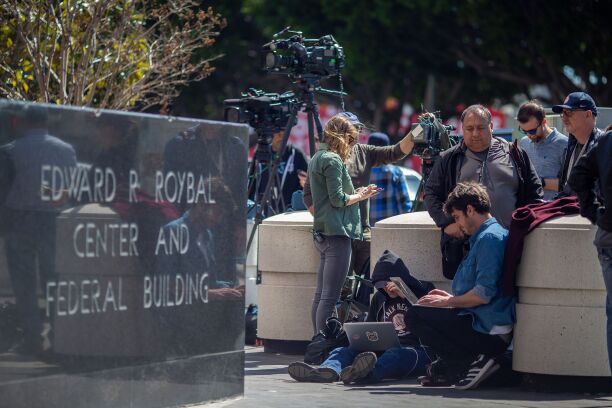 Members of the press wait outside the Edward R. Roybal Federal Building and U.S. Courthouse in Los Angeles, where numerous people had hearings after being arrested on March 12, 2019, in connection with an alleged $25 million nationwide bribery scheme to get students into elite universities.
David McNew/AFP/Getty Images

Cooley and Sidley Austin have joined a growing list of Big Law firms with lawyers who are representing defendants in the college admissions cheating scandal case.

Cooley partners Randall R. Lee and William Schwartz have been hired by Jane Buckingham. Buckingham, the founder and chief executive of Trendera, a youth marketing consultancy, allegedly paid $50,000 for someone to take the ACT college entrance exam in her son’s place.

Lee, who joined the firm’s Los Angeles office in February from WilmerHale, specializes in high-stakes litigation, investigations, and white-collar defense.

He’s a former Regional Director for the Pacific Region of the U.S. Securities and Exchange Commission. Prior to his time with the SEC, Lee worked at the U.S. Attorney’s Office in Los Angeles as an Assistant U.S. Attorney and Deputy Chief of the Major Frauds Section.

Schwartz is chair of the firm’s white collar and regulatory defense group and is based in New York. Before joining Cooley, he served as Assistant U.S. Attorney in the U.S. Attorney’s Office for the Southern District of New York where he was Deputy Chief of the Criminal Division.

McGlashan worked at private equity firm TPG before being fired in the wake of the scandal. He’s been accused of paying to have his son’s college entrance exam scores doctored and of paying for a fake athletic profile to help his son gain admission to the University of Southern California.

Pirozzolo focuses his practice on white collar criminal defense and complex civil litigation. Before joining Sidley, he worked in the U.S. Attorney’s Office for the District of Massachusetts. His last five years there he served as the First Assistant U.S. Attorney.

He oversaw the apprehension and prosecution of both James J. “Whitey” Bulger and Boston Marathon bombing defendant, Djokhar Tsarnaev.

Foley Hoag, Ropes & Gray, Latham & Watkins, Boies Schiller Flexner, and Pepper Hamilton have also been hired by defendants since the allegations were made public March 11. Some 32 high-profile defendants stand accused of conspiring to bribe college admissions officials to gain entrance for their children to top universities.

The Justice Department charged the defendants, who include actors Lori Loughlin and Felicity Huffman as well as Willkie Farr & Gallagher Co-Chair Gordon Caplan, with conspiring to bribe college admissions officials to gain entrance for their children to top universities.

Cooley has 1,000+ lawyers across 14 offices in the United States, China and Europe. Sidley has 2,000 lawyers in 20 offices around the globe.