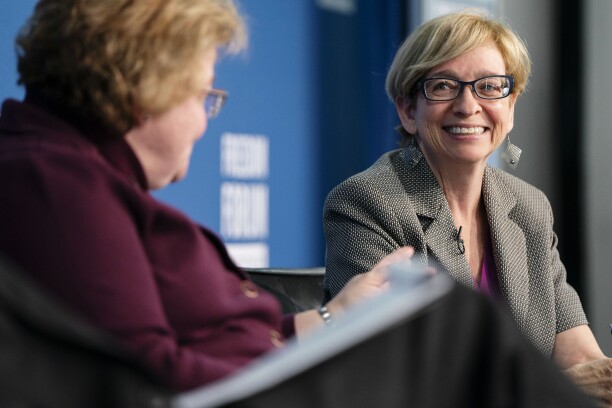 Feldblum was a progressive force on the commission for the last eight years. Her decision to jump to a management-focused firm went against the commonly-held notion in labor and employment law that Democrats largely represent unions and employees while Republicans work for companies.

Unlike, for instance, prosecutors who wind up at law firms doing white-collar defense, labor and employment lawyers have been known to pick a side and stick to it throughout their careers.

This idea is strongly supported by a Bloomberg Law analysis of the career paths of former general counsel and members of two key federal labor and employment federal agencies, the EEOC and the National Labor Relations Board. But that doesn’t mean everyone agrees such partisanship is the best way forward.

“It’s a pattern that is just continuing, not changing,” said Samuel Estreicher, director of the Center for Labor and Employment Law at NYU. He said he was surprised by Feldblum’s leap to Big Law, “not because I thought it would contaminate her, but knowing her career, knowing her very well.”

“That kind of crossover is a healthy thing,” said Estreicher. “I wish we could see more of it.”

Bloomberg Law examined the first known post-agency jobs of former NLRB and EEOC officials, including those who served on an acting basis, with terms beginning during the last 20 years. Data about the 37 officials came from the agencies as well as interviews and online research.

Over this period, 10 Republicans versus one Democrat, Feldblum, made the move into defense firms after leaving their agencies. They landed largely at Big Law firms including Littler Mendelson, Jones Day, Ogletree Deakins and Morgan Lewis.

No Republicans in the analysis went to plaintiffs firms, though two Democrats wound up in those jobs. An additional two Democrats went to work directly for unions, while one Republican went in-house at a company.

The same number of Democrats and Republicans stayed in government. They wound up joining the ranks of the U.S Labor Department, the Consumer Financial Protection Bureau, and the Federal Mediation and Conciliation Service, among other landing spots in Washington or in state governments. 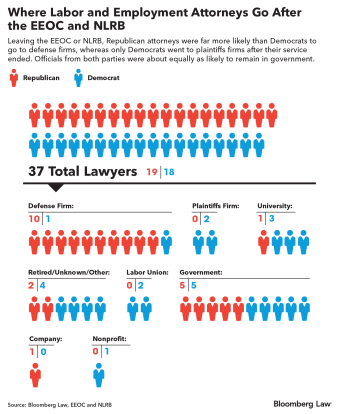 Feldblum recognizes that her move to Big Law might be seen as unusual, but she told Bloomberg Law she believes it’s the best way for her to continue the work she started at the EEOC. While there, she and fellow commissioner (now acting chair) Victoria Lipnic, a Republican, co-led a task force on workplace harassment. They published a comprehensive report outlining the steps that organizations should take to prevent this misconduct.

“I felt like I spent two years writing the roadmap, two years talking about the roadmap, and now I’m ready to start helping employers implement that roadmap,” said Feldblum. At Morgan Lewis, her role will be limited to preventative efforts and settlements—she plans to help companies draft plans to correct the cultures that led to harassment in the first place. “To do prevention well, I have to do it from a side where employers feel safe when I come in to help them.”

Marshall Babson, a Democrat, went to a management-side law firm after serving as an NLRB member in the 1980s. But for Babson, that wasn’t a career change. He had been at a management-side firm before joining the board. “It’s not always just party, the expertise that you’ve gained as a practitioner is probably more significant,” said Babson, now a partner at Seyfarth Shaw.

Babson, who was appointed by President Ronald Reagan, said after that administration, “it kind of defaulted to Democrats being union lawyers and Republicans being management-side lawyers.”

Feldblum said her decision to join a management-side firm wasn’t easy. She expected that many former colleagues on the employee-advocacy side would question the move, and Big Law firms weren’t exactly knocking on her door. “It was not the case that any management firm reached out to me ever,” she said. “It was always me reaching out to them. I don’t think any of them would have ever thought about it.”

“If it had been any other agency they would have not only been knocking on her door, but knocking it down,” said Stephen Paskoff, a former trial attorney for the EEOC who moved to a management-side firm and is now a workplace consultant.

Paskoff said he didn’t encounter many lawyers with his background while on the management side. “The thing that’s ironic about this is that there are probably people who might be in the EEOC because they assume they’ll never work for a management firm,” he said. “They’re making a stereotypical assumption that they could never be fair or do other things than represent the worst in their clients. On the other hand, you probably have management side firms who say, no way I’m ever hiring anyone from the EEOC.”

Line in the Sand

Even though she’s joined a management-side firm— and one that many view as particularly pro-employer— Feldblum said she’s not interested in direct legal representation in discrimination claims or litigation. She’s more interested in working with companies to prevent harassment from happening in the first place.

She also doesn’t think that partisan differences in career paths should be seen as a line in the sand across the field of labor and employment law. “I think people who are either working on the plaintiff side or the management side are often working towards the same goal, of having the law be complied with,” she added. “It’s not that I think one is evil or one is good.”

Babson also pushed back against the idea of clear-cut “sides.” “It’s one thing to have a set of views based on your experience and background, which is something to be expected, and it’s another thing for people on one side or another to demand ideological purity, if you will, from somebody who is a practitioner. I think that’s asking too much of people,” he said. “People change religions, why can’t they change sides in labor law?”

With assistance from Rebekah Mintzer and Chris Opfer.