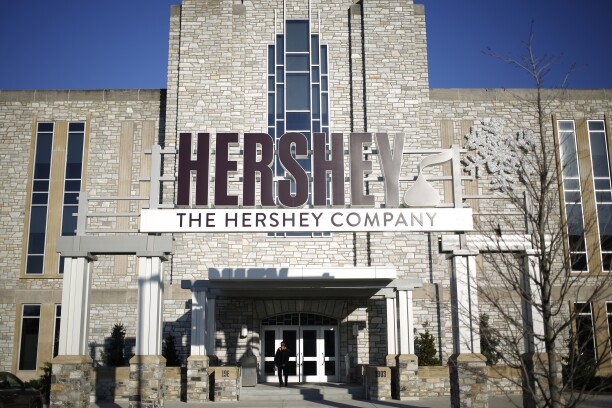 Signage is displayed outside of the Hershey Co. headquarters in Hershey, Pa., in 2017.
Photographer: Luke Sharrett/Bloomberg via Getty Images

A former intellectual property lawyer can’t proceed with a suit alleging he was discriminated against when the company terminated him by saying it was eliminating his position, but then hiring “a younger, African-American woman” for the same job, the Middle District of Pennsylvania said Nov. 4.

Kurt L. Ehresman’s claims were barred by an agreement he signed when he left the company, the court said.

Ehresman, a 52-year-old white man, worked as Hershey’s Senior Counsel for Global Intellectual Property until Hershey told him it was eliminating his position. Months after his termination, Ehresman said Hershey created a “Head of Intellectual Property” position—which he called “nearly identical” to his former job—and hired a younger black woman “to promote Defendant’s goal of diversity.”

Ehresman sued Hershey for race, color, and gender discrimination under the Civil Rights Act, and for fraudulently inducing him to sign a severance agreement based on his belief that his position was eliminated.

But the court found Ehresman waived his claims based on a release he signed with the agreement.

The release was “clear and specific” that it covered discrimination claims “and any other Federal, state or local law concerning the employment relationship,” the court said. And Ehresman was qualified to understand the release based on his educational and professional background, among other things.

“As a matter of law, the fraudulent representations regarding the elimination of Plaintiff’s job were made prior to the parties entering into contract were superseded by the written contract,” the court said. “Any representations relied upon by Plaintiff should have been incorporated into the writing.”