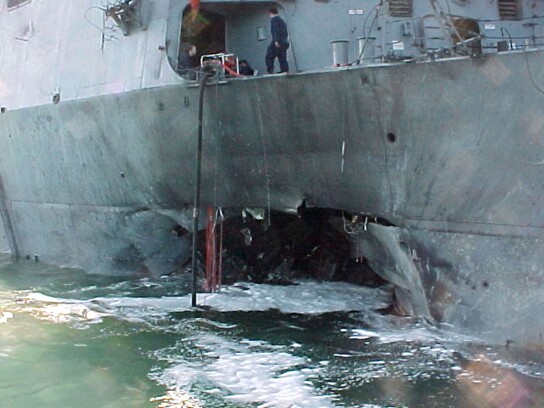 A federal appeals court decision vacating orders issued by a former military tribunal judge presiding over the USS Cole bombing case because he failed to appear impartial may be where the consequences end for him.

Ethics experts and attorneys said even though it’s likely that Vance Spath won’t face disciplinary action for failing to disclose his efforts to get a job at the Justice Department while serving on the tribunal, there are a few ways that he could face further repercussions.

The retirements of federal appeals court judges Alex Kozinski and Maryanne Trump Barry, and the elevation of another, Brett Kavanaugh, to the Supreme Court, illustrate what many consider to be a lack of meaningful discipline for alleged ethical lapses by judges once they leave their seats.

Spath, an Air Force colonel at the time, oversaw the case against the alleged mastermind of the deadly 2000 Al Qaeda warship bombing in Yemen while he applied for and accepted a job as an immigration judge from the Justice Department, which was at the time prosecuting Abd al Rahim al Nashiri. Spath retired from the service before beginning the immigration judgeship in Virginia in 2018.

The U.S. Court of Appeals for the District of Columbia Circuit ruled April 16 that Spath’s actions cast doubt on his impartiality in the case. The court vacated all of his orders after he applied for the immigration judicial position, which accounted for three of the four years he was on the Cole case. These include oral orders as well as “approximately 460 written orders,” the D.C. Circuit noted.

Spath joined the case in 2014, and was part of the second military commission convened to try al-Nashiri, who’s been held at the U.S. Naval Base at Guantanamo Bay, Cuba, since 2006. He’s accused of orchestrating the bombing that killed 17 sailors and injured more than three dozen aboard the Cole. He faces the death penalty, if convicted.

Circuit judges, district judges, magistrate judges, and bankruptcy judges are subject to the Judicial Conduct & Disability Act, which allows anyone to file a complaint against a federal charge for alleged misconduct. But there are exceptions, including retired judges and Supreme Court justices, who don’t fall within the statute’s purview.

But there are a few other avenues that may be open to discipline Vance.

Kammen withdrew from representation in 2017 after concerns that his conversations with al-Nashiri were being recorded by the government. Professional conduct rules prohibit further representation in such instances.

Spath could could also be subject to discipline in New York, where he’s licensed to practice law, if a complaint is filed with the state’s attorney grievance committee.

The state bar could pursue him under professional conduct rules that prohibit dishonesty, deceit, fraud, and misrepresentation as well as acting contrary to the administration of justice, said Ellen Yaroshefsky, an ethics professor at Maurice A. Deane School of Law at Hofstra University in Hempstead, N.Y.

Yaroshefsky advised Kammen in 2017 that Kammen was ethically obligated to withdraw from the case.

The D.C. Circuit pointed out that while overseeing the Cole case, Spath applied for an immigration judge position, which the U.S. attorney general—a party to the case— appoints, and that his behavior was highly questionable.

Spath “affirmatively called the Justice Department’s attention to his handling of al-Nashiri’s case, making his performance as presiding judge a key point in his argument for employment,” the court said.

It’s as though he was trying to curry favor with his employer, and a reasonable person would have questions about his impartiality in his new job because of the actions he took in his old one, Hellman said.

Due to confidentiality rules, New York’s attorney grievance committee didn’t disclose whether there are any actions pending in this matter.

Another possible route to possible discipline is through Spath’s current employer.

The government should restore public confidence in the judiciary by taking action against him in his present position, including potential dismissal, Hellman said.

But whether additional discipline is warranted depends on whether he was concealing willful misconduct, said Charles Gardner Geyh, a judicial conduct and ethics professor at at Indiana University Bloomington’s Maurer School of Law.

He said if Spath honestly believed that the Justice Department lawyers who appeared before him in military court wouldn’t interact with or be consulted by the agency in the process of deciding whether to hire him, then his fitness to serve may not be undermined—even if he should have disclosed the connection or disqualified himself.

“But if it’s pretty clear that the DOJ lawyers’ assessment of the judge’s performance in military court would be a natural part of the evaluation process for the immigration court job, then we’re left with two more problematic possibilities: Either the judge consciously ingratiated himself to his DOJ evaluators while presiding in Military Court; or he consciously struggled against the impulse to do so,” he said.

The first alternative reflects badly on the judge’s integrity and fitness to serve as a judge, Geyh said.

“The second is less extreme but still qualifies as a form of willful misconduct insofar as the judge knew that his impartiality was placed at risk by his job hunt, but kept it concealed,” he said.

The Justice Department didn’t respond to a request for comment.