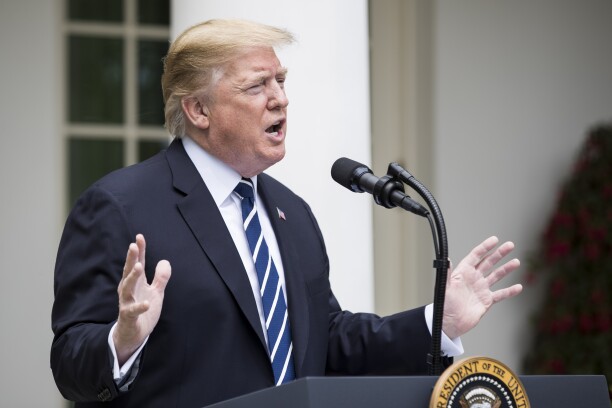 Trump speaks during a news conference in the Rose Garden.
Photographer: Sarah Silbiger/Bloomberg

White House lawyer Steven Menashi and U.S. District Judge Halil Suleyman Ozerden likely will have to wait at least a week for the committee to again consider their nominations to the U.S. Court of Appeals for the Second and Fifth Circuits, respectively.

Democrats and at least one Republican previously criticized Menashi after he failed to answer questions related to his role as a Trump White House lawyer over immigration policies like family separation.

Ozerden was held over after conservative Republican Sens. Ted Cruz of Texas and Josh Hawley of Missouri in recent weeks expressed opposition to his nomination. They and some outside groups say he’s not conservative enough on religious liberty and other issues.

Sen. John Kennedy, a Louisiana Republican and member of the Judiciary Committee, told Bloomberg Law that support in the committee for both the Ozerden and Menashi nominations are not firm. “I’m not surprised because the votes were real squishy,” he said of the committee decision to hold them over.

The Menashi picture is cloudier in committee, while stated opposition to Ozerden from Cruz and Hawley put his nomination in jeopardy.

Republicans control the full Senate by a wide enough majority to have pushed through virtually all of Trump’s judicial nominees. But Republicans only have a two-vote majority in committee. If both Cruz and Hawley vote no, that means Ozerden would need Democratic backing for majority support.

In brief interviews with Bloomberg Law on Oct. 17, Hawley said he still doesn’t plan to vote for Ozerden while Judiciary Chairman Lindsey Graham of South Carolina expressed support, and said he still had White House support, too.

Kelly Shackelford, president, CEO, and chief counsel for First Liberty Institute, said in a statement that it was time for lawmakers “to move on” from Ozerden “to a nominee with a solid track record on religious liberty for this important swing vote seat on the Fifth Circuit.” It’s considered one of the nation’s most conservative appeals courts.

Other circuit court nominees also held over by the Judiciary panel on Oct. 17 were William Joseph Nardini and Danielle Hunsaker to the Second and Ninth Circuits respectively. Their nominations are not considered controversial.

Walker has been a law professor and private attorney. The American Bar Association has said he’s not qualified for a lifetime trial court seat.

The panel also cleared the nomination of Lee Rudofsky, the senior director of Walmart’s anti-corruption compliance team, who’s nominated to the Eastern District of Arkansas.

Rudofsky has also worked on the legal teams of several prominent Republican political campaigns, including Mitt Romney’s 2012 presidential bid, and is a former Kirkland & Ellis associate.

Walker, Rudofsky and the other district court nominees approved by the panel now will be conisdered by the full Senate.

Also held over was Sarah Pitlyk, who’s nominated for a district court seat in Missouri. Pitlyk was opposed by Democrats because she received a not-qualified rating from the ABA.

The Senate confirmed four district court nominees on Oct. 16, raising to 152 the number of district and circuit court appointments under Trump. He appointed Brett Kavanaugh and Neil Gorsuch to the Supreme Court as well.

(Updates throughout and adds Hawley and Graham comments. )