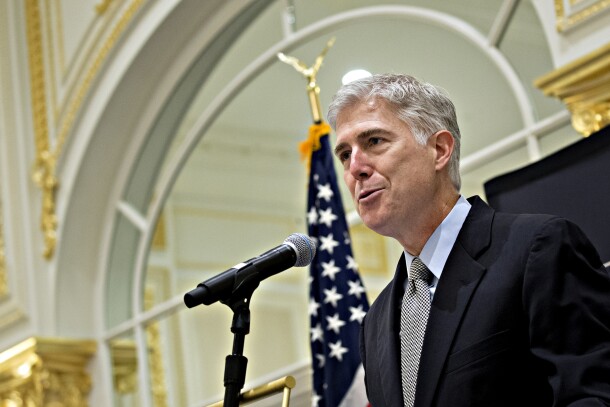 Justice Neil Gorsuch has delivered almost precisely what conservatives were hoping for over his two years on the U.S. Supreme Court, even though his principles occasionally take him in other directions.

He’s followed the originalist mold of the late Justice Antonin Scalia, even joining the court’s liberals at times on criminal procedure matters as Scalia often did. He’s made Clarence Thomas less of an iconoclast in arguments to overturn longstanding precedents.

But he’s also made his individual marks with bold wording on capital punishment and Native American rights, including his opinion this month that the Eighth Amendment’s protection against cruel and unusual punishment doesn’t “guarantee a prisoner a painless death.”

“Gorsuch has been a grand slam for President Trump, who campaigned on a promise to appoint originalist and textualist justices in the mold of Scalia,” Mike Davis, who clerked for Gorsuch at the U.S. Court of Appeals for the Tenth Circuit and at the high court, told Bloomberg Law.

To progressives, Gorsuch has been a fifth vote against workers and voting rights, and for Trump’s “outrageous travel ban targeting Muslim countries,” said Sam Berger, a former adviser to President Barack Obama. He’s now vice president of the Democracy and Government Reform Program at the Center for American Progress.


One of Gorsuch’s clearest impacts has been in giving Thomas a partner in challenging precedents underpinning some of the Supreme Court’s most seminal decisions.

Gorsuch took his seat at the tail end of the court’s 2016 term, but in all 17 cases that he participated in, he agreed with Thomas on the underlying judgment every time, according to statistics from SCOTUSblog. No other two justices were in agreement in every case; Ruth Bader Ginsburg and Sonia Sotomayor were on the same side 93 percent of the time.

Thomas and Gorsuch have disagreed more often since then. But during the 2017 term, they still agreed 81 percent of the time.

And over the 29 cases decided this term, including summary decisions, Thomas and Gorsuch (and Justice Samuel Alito) have agreed 90 percent of the time, according to Bloomberg Law research. 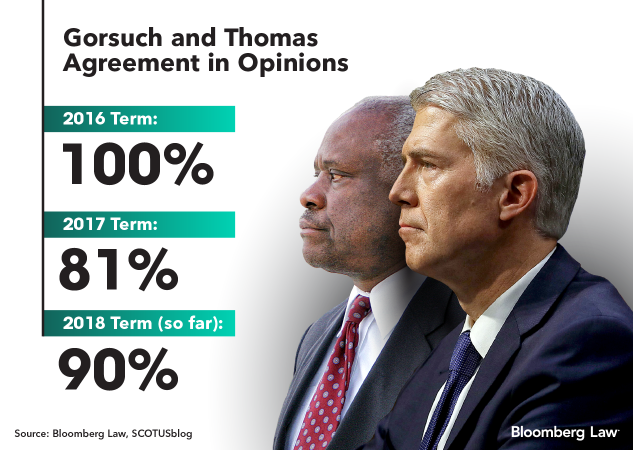 Gorsuch joined Thomas in a dissent in February’s Garza v. Idaho that questioned whether the 1963 decision in Gideon v. Wainright, which recognized the right of indigent defendants in criminal trials to have the assistance of counsel, was rightly decided.

When Thomas wrote an opinion in February’s Timbs v. Indiana suggesting that the court should embrace the privileges or immunities clause, which could undermine the doctrine of substantive due process used to protect the right to an abortion and to marry someone of the same sex, Gorsuch wrote separately in support of the idea.

“I think we’re seeing a Gorsuch impact on the lower courts, in that Trump judges are becoming more brazen in pushing on precedent” because they anticipate less push-back from a court on which the justice sits, Dan Goldberg of Alliance for Justice, a progressive organization that has opposed many Trump nominees, said.

The justice joined the majority that overturned a 1977 ruling, in 2018’s Janus v. Am. Fed’n of State, Cty., and Municipal Emps.

The two are the strongest proponents of originalism on the court, Ilya Shapiro of the Cato Institute, a libertarian organization, said. Originalism seeks to interpret the Constitution’s words according to their meaning at the time the document was written.

When the court decided not to stop the federal ban on sales of so-called bump stocks for guns from taking effect last week, only Gorsuch and Thomas dissented.

But the two have sometimes parted ways, as they did when Gorsuch joined the court’s liberal justices in finding that a law used to deport immigrants was too vague, in last year’s Sessions v. Dimaya.

Dimaya shows that originalism “isn’t a results oriented methodology,” because Thomas and Gorsuch each used it but sided differently, said Jones Day associate David Feder, who clerked for Gorsuch during two Supreme Court terms and once at the Tenth Circuit.

Gorsuch has also teamed up with one of his most liberal colleagues, Sotomayor, on criminal procedure issues.

The state of Alabama denied a woman convicted of negligent homicide and driving under the influence “the chance to confront the witness who supplied a foundational piece of evidence in her conviction,” Gorsuch said, in 2018’s Stuart v. Alabama.

“The engine of cross-examination was left unengaged, and the Sixth Amendment was violated,” he said.

Gorsuch’s time on the Colorado-based Tenth Circuit gave him the deepest background in tribal law among the justices.

He applied that in March, siding with his four liberal colleagues in a decision holding that an 1855 treaty between the federal government and the Yakama tribe precluded Washington state from imposing a fuel import tax on tribal-owned businesses.

Gorsuch, in his opinion, called the case an “old and familiar story” of the government violating promises made to tribes when it pressured them into ceding their lands.

“The State is now dissatisfied with the consequences of one of those promises. It is a new day, and now it wants more. But today and to its credit, the Court holds the parties to the terms of their deal. It is the least we can do,” Gorsuch wrote in his concurrence in Washington State Department of Licensing v.Cougar Den.

But Gorsuch’s desire to protect individual rights doesn’t apply to people on death row, as shown by his opinion in Bucklew v. Precythe, said Elliot Mincberg of the progressive People for the American Way. Progressives used words including “bloodthirsty” in saying Gorsuch’s language effectively blessed torture.

In March, the high court halted the execution of a Buddhist man whose request to have a spiritual adviser in the execution room was denied by the state of Texas, in Murphy v. Collier. Only Gorsuch and Thomas dissented.