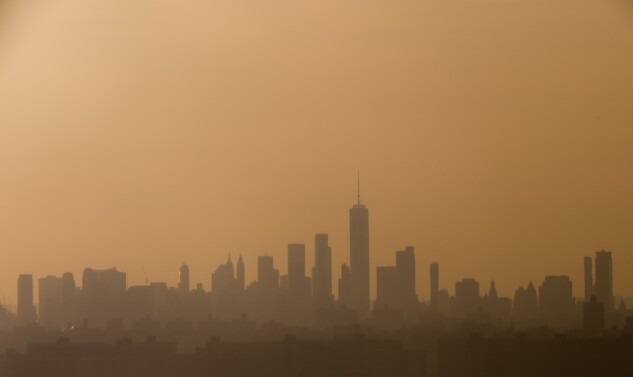 The skyline of Manhattan is seen at sunset in New York on May 23, 2018.
Photographer: Saul Loeb/AFP/Getty Images

“Our goal is to provide lawyers with complete confidence in trying such cases. We are trying to give them a road map for what they can expect at trial,” Fleischer said.

Legal aid organizations are mobilizing across the city to handle an uptick in housing court cases as New York phases in the universal access, or right-to-counsel, initiative signed into law in 2017 to curb homelessness.

The volume of cases is heavy. Legal help went to 26,000 households, affecting about 87,000 New Yorkers confronting eviction proceedings in fiscal 2018, according to the New York City Human Resources Administration’s Office of Civil Justice. Nearly 22,000 households were able to stay in place, the city reported.

“Right to counsel has been ground breaking,” said Marika Dias, director of the Tenant Rights Coalition at Legal Services NYC. “The law has had a real impact on reducing evictions.”

The city provided $15 million for the initial rollout of the right-to-counsel guarantee. The measure was first implemented in two phases in 20 zip codes with high levels of evictions, entries into shelters and rent-regulated housing.

It is being carried out by more than a dozen nonprofit organizations, including citywide legal services providers and smaller community-based groups, which have geared up to handle the increased eviction caseload.

By 2022, the city expects to provide free legal assistance to as many as 400,000 residents who face eviction and displacement, according to the city’s civil justice office. Recipients of free legal assistance may not earn above 200 percent of the federal poverty guideline, which is about $49,000 for a family of four.

Fleischer and Ratner put together a 24-page program outlining the specifics of how to prepare and carry out a tenant defense in court, from collecting documents and preparing witnesses to tips about how to deal with a “bad” judge.

“The goal is to level the playing field for tenants in housing court,” Fleischer said.

Claunick Duronville, a CAMBA staff attorney, took the first training session in August. Duronville said Fleischer and Ratner “gave a very explicit structure for how to go about developing a theory of the case then following through on things like preparing and writing motions. You don’t learn those things in law school.”

The right-to-counsel law has not reduced the number of attempted evictions but has made a big shift in how resources are allocated, said Dias, who noted that Legal Services provides its own lawyer training.

San Francisco and Newark, N.J., have since adopted similar measures.

To contact the reporter on this story, Elizabeth Olson in Washington: egolson1@gmail.com