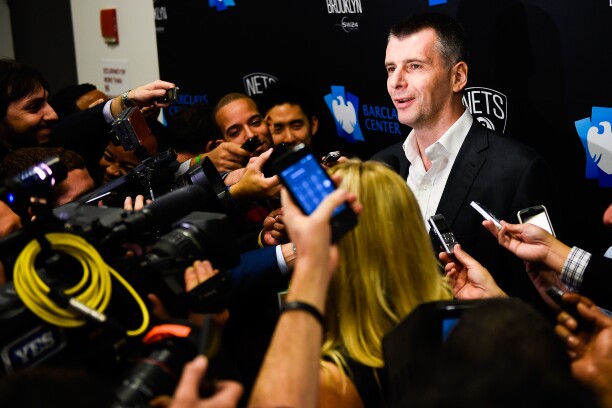 Brooklyn Nets owner Mikhail Prokhorov speaks to the media before a game between the Brooklyn Nets and Oklahoma City Thunder at the Barclays Center on November 3, 2014 in the Brooklyn borough of New York City.
Photo by Alex Goodlett/Getty Images

Hogan Lovells is representing Russian billionaire Mikhail Prokhorov in his sale of the Barclays Center and controlling interest in the Brooklyn Nets to an entity controlled by Joe Tsai, co-founder of Chinese conglomerate Alibaba Group.

The firm has worked with Prokhorov on related transactions before. In 2018, Hogan advised him in selling a 49% stake to Tsai, who will now be the sole owner of the basketball team.

Prokhorov has maintained his interest in the Nets and Barclays through his company Onexim Sports and Entertainment Holding USA Inc.

His legal team was led by Denver-based Hogan partners Matthew Eisler and Craig Umbaugh. Both worked on the previous Nets sale, and have extensive experience with other professional sports-related clients.

For instance, both worked with Oracle Corp. to obtain naming rights to the ballpark where the MLB’s San Francisco Giants play, which as of earlier this year is called Oracle Park.

The deal, which requires the approval of the NBA Board of Governors, is expected to close by the end of September, according to the Brooklyn Nets. Tsai, executive vice chairman of Alibaba, will become chairman of the board of directors for Barclays Center and NBA governor of the Nets and its affiliates.

“As international audiences grow for U.S. sports teams, ownership of these teams have become increasingly cross-border,” Eisler said in a statement. “Global investors are seeing an attractive opportunity to profit from the popularity of U.S. sports team properties and their venues.”

Prokhorov bought the Nets in 2010, when they were still based in New Jersey, with the plan to move them to Brooklyn. The Nets officially made the move in 2012, settling in the brand-new Barclays Center sports arena near downtown Brooklyn.

“I’ve had the opportunity to witness up close the Brooklyn Nets rebuild that Mikhail started a few years ago,” Tsai said in a statement. “He hired a front office and coaching staff focused on player development, he supported the organization with all his resources, and he refused to tank.”

The ownership change won’t affect the management of the team, according to the Nets.