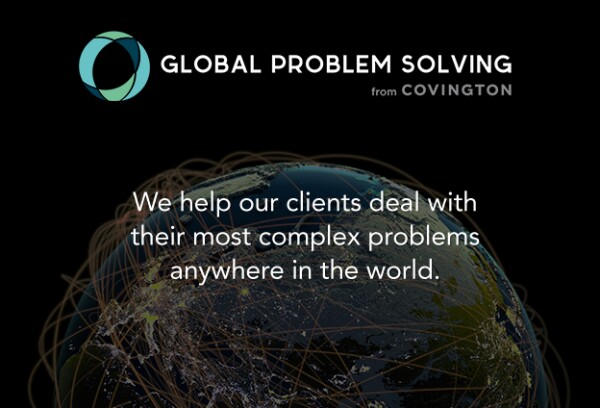 Covington & Burling partner and former Attorney General Eric Holder still stays in touch with a senior Nigerian government official he met in 2016 while helping to represent a telecommunications client as part of the firm’s Global Problem Solving team.

The official told Holder when they first met that he knew all about him from watching C-SPAN when Holder was the nation’s chief law enforcement official under Barack Obama.

This formed “the basis for a relationship that turned out to be useful for the resolution of the matter but it’s really just turned into a relationship where we still text and email about things,” Holder told Bloomberg Law.

Holder’s story about this cross-border connection says a lot about how the GPS team works.

It pursues cases that often involve foreign governments and companies, and large sums of money, that benefit from the team’s unusual setup: a mix of lawyers, former diplomats, and former senior government officials who approach problems from a policy angle as well as just a legal one.

He said the 120-member group has existed for a while informally but Covington recently gave it an official title and website.

Like Covington, many other major law firms are increasingly recognizing just how global their clients’ biggest problems can be and that sometimes adding non-lawyers to a team can provide clients with valuable insights.

The Nigeria issue centered on MTN, a South African-based telecommunications company. The Nigerian government levied a roughly $5.2 billion fine on MTN in 2015 because it didn’t meet a deadline to disconnect unregistered subscribers.

The penalty was “huge,” said Holder, much bigger in relation to the size of the company than the more than $20 billion fine the Justice Department levied on BP for the 2010 Deepwater Horizon oil spill.

The group became involved after GPS member Witney Schneidman, the firm’s senior international adviser for Africa, reached out to company executives after the fine was announced, offering help.

Schneidman pointed to Holder’s experience with Deepwater Horizon, and his work with British authorities on it while he was attorney general, he said.

The group, which included Holder, Schneidman, Ambassador Daniel L. Spiegel, and Mipe Okunseinde, who’s no longer with the firm, worked with local counsel in Nigeria to learn about the country’s legal system, and held several meetings with the Nigerian government to discuss how to move forward, Holder said.

The fine was ultimately reduced and MTN was able to continue doing business in Nigeria. Holder said his team argued to the government that the fine would chill companies from seeking to do business there.

The MTN case was an example of the GPS team going after a client, which is part of its strategy, though clients also initiate.

And the group doesn’t just work on problems for clients but tries to use its resources to anticipate what problems could arise in the future and craft resolutions for them, said Sebastian Vos, co-chair of the firm’s public policy practice.

For example, the Global Blockchain Business Council, which Vos helped found in 2017, asked the group to help educate world leaders about the technology.

Blockchain is a technology that uses cryptography to create permanent records of information. It’s used for cryptocurrencies but also in the financial services industry and even for online voting.

The GPS team also handles CFIUS and Foreign Corrupt Practices Act matters, Brexit-related issues, as well as those stemming from changes in trade policy with China and that country’s growth on the global stage. But it also finds time to help clients pro bono.

Vos works with Missing Children Europe, for example, to encourage European countries to adopt regulations that would enhances the group’s ability to do their work.

Missing Children Europe is an umbrella organization for NGOs in 26 countries that seeks to find and protect missing and sexually exploited children. The work involves a lot of cross-border maneuvering that regulations could help streamline, Vos said.

Working on high-profile cases could provide challenges for a group of top lawyers, former diplomats, and world leaders but the GPS members said a culture of teamwork prevails.

“These are people with not small egos, who have been players on the world stage but who can check their egos at the door—or before a conference call,” Holder said.