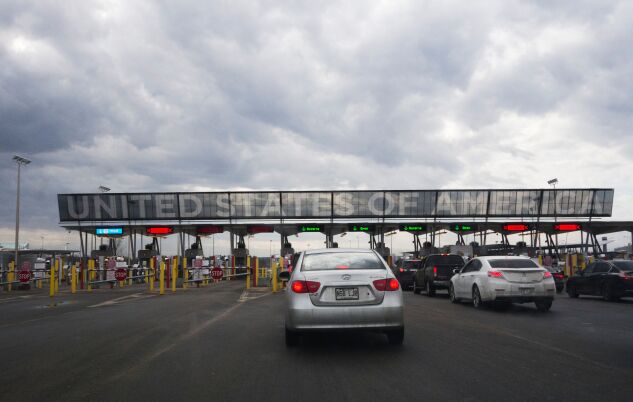 Customs and Border Protection says commuters and “intermittent” Canadian L-1 workers aren’t subject to a new policy that blocks them from renewing their visa status at the border.
Photographer: Don Emmert/AFP/Getty Images

Assessing the immigration consequences of a corporate merger or reorganization needs to be done before publicly announcing a transaction or before closing. Baker Donelson’s Joey Chbeir looks at considerations to minimize the risk of losing foreign employees and ensure that acquired employees remain in status during and after the transition.

The number of corporate mergers and acquisitions has broken annual records in the last few years, as has the Trump administration’s denials of petitions or visas by the U.S. State Department and the U.S. Citizenship and Immigration Services. These upward trends go hand-in-hand with the importance of addressing immigration issues during a corporate restructuring.

Parties involved in corporate restructuring are generally seeking returns much greater than the cost of capital financing the transaction and cannot afford losing key employees, as unplanned turnovers in key areas could negatively impact a merger’s success and wreak havoc on the investor’s bottom line.

As such, from an immigration law perspective, the consequences of M&A or corporate restructuring should be addressed before a transaction is announced, to minimize the risk of losing foreign employees and ensure that acquired employees remain in status during and after the transition.

To date, immigration law practitioners still rely heavily on Chapter 22 of the Adjudicator’s Field Manual, which addresses the consequences of a corporate restructuring, merger, acquisition, consolidation, or spin-off. Whether “a company is bought, merged, changes corporate structure, or significantly changes owners,” the main issue to consider is still “whether the new or reorganized company is generally considered a successor-in-interest (SII) of the original company.”

Another important factor to determine is whether the acquired foreign employee will remain in the same job function, continue to perform the same duties and maintain employment in the same Metropolitan Statistical Area.

Generally, finding that the transaction involves a successor in interest employer without any changes to the foreign employees’ job would save the new entity time, money and the hassle of responding to an RFE or dealing with a denial. Indeed, the new employer would have to ultimately report the corporate reorganization to USCIS.

For example, in the health-care sector, a successor in interest that does not maintain a tax-exempt status may not continue to legally employ an H-1B employee whose visa was exempt from the visa cap limitations. Similarly, in the case of a corporate reorganization that does not involve keeping foreign entities, the new entity could qualify as a successor in interest but will not be able to keep an L-1 visa holder in status if there are no operations overseas.

Under other circumstances, particularly during the permanent residency process, the solution depends on the stage of the I-140, i.e., whether an I-140 petition (Immigrant Petition for Alien Worker) is approved, is pending or is being prepared to be filed. Indeed, some visas do not depend on the employer and employees in these statuses would not need attention.

Therefore, the best approach is to carefully assess the situation of every foreign national, understand their job function, discuss changes that are being considered by the future employer and be prepared to file the necessary petition.

From an enforcement prevention perspective, in fiscal year 2018, the U.S. Immigration and Customs Enforcement (ICE) significantly ramped up the number of Form I-9 audits, increasing inspections by 340% from the total inspections conducted in FY 2017, as well as fines and criminal penalties for immigration violations. I-9 forms are used to verify identity and employment eligibility.

As part of the M&A due diligence process, companies are advised to conduct a I-9 compliance audit prior to the close of the transaction to ensure that the assumed risks and liabilities of the acquired company’s I-9 forms would not create an enforcement nightmare.

Many corporations still fail to carefully assess the immigration consequences of a corporate reorganization prior to publicly announcing the transaction or before closing. Since the trend toward immigration enforcement continues to gain momentum and employers cannot risk losing foreign nationals in this tight job market, having a plan in place is far more cost effective than losing an employee or dealing with an investigation.

Joey Chbeir serves as of counsel in Baker Donelson’s Birmingham, Ala., office. As a member of the firm’s immigration practice and Global Business Team, he advises clients on international investments and immigration solutions.