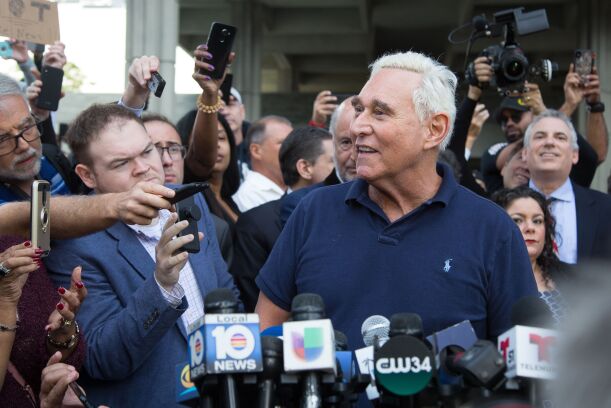 Roger Stone, a longtime adviser to U.S. President Donald Trump, speaks to the media outside court Jan. 25, 2019 in Fort Lauderdale, Fla. Stone was taken into custody by heavily armed police in a predawn raid at his home in Fort Lauderdale after an indictment was unsealed in Washington by Special Counsel Robert Mueller.
JOSHUA PREZANT/AFP/Getty Images

The recent arrest of Trump confidant Roger Stone highlights the issue of “perp walks,” when arrested defendants are displayed for the media. Lightfoot, Franklin & White LLC attorneys discuss the government’s justification for perp walks and what lawyers can do to protect clients in danger of running the gauntlet.

The recent arrest of Trump confidant Roger Stone brings to the fore once again the “perp walk,” an occasion when an arrested defendant is displayed for the media.

What is its justification? Are there limits to it? What—if anything—can lawyers and clients do to protect themselves from running the gauntlet?

A public arrest, especially a sudden one in the early morning hours, may be appropriate because of potential violence, flight, or obstruction.

A defendant may have a history of violence and pose a physical threat to the community, to the arresting agents or to himself. Or, the investigation may have revealed that there is a risk of flight: the defendant has previously fled or evaded law enforcement, for example, or she has the resources and contacts to do so. Finally, the government may have a factual basis to fear that, if the defendant has the relative leisure of responding to a summons and surrendering voluntarily, he or she will destroy evidence or intimidate witnesses.

Prosecutors often argue that perp walks are appropriate because they “send a message” that white-collar offenders are treated the same as any other offender. The government claims that an executive in handcuffs has a bracing effect on other businesspeople and will deter wrongdoing. A widely publicized arrest is supposedly tangible evidence that the government is “doing something” about white-collar crime. Finally, the government theorizes that publicized arrests encourage cooperating witnesses.

A fifth, unstated but undeniable government reason for a perp walk is that it puts pressure—shame, humiliation, disarray—on a defendant.

The perp walk’s detractors point out that, in many business-crime investigations, the three grounds set out above simply do not apply, and the four policies could be satisfied by other means. Few white-collar defendants have a history of violence.

The target’s lawyers and the prosecutors will likely have had extensive communications, offering many business-crime defendants ample time to flee. They often do not because they have roots in the community; stable home lives; and high professional or business standing, all of which would be lost were they to flee. A white-collar defendant can attempt to destroy evidence, but that concern can be allayed by the execution of a search warrant.

If you represent an individual in danger of being perp walked, what can you do?

Unless you can demonstrate that the perp walk has so tainted the jury pool that your client cannot receive a fair trial, a Sixth Amendment challenge will fail. Although courts acknowledge that a perp walk has at least some Fourth Amendment implications, the practice will be upheld if there is any legitimate law enforcement purpose to the show—a low standard.

In a federal case, note the United States Attorney’s Manual: “DOJ personnel should not encourage or assist news media in photographing or televising a person held in custody. … In cases where a search warrant or arrest warrant is to be executed, no advance information will be provided to the news media without the express approval of the appropriate United States Attorney or Assistant Attorney General. This requirement also applies to operations in preparation for the execution of a warrant.”

In an unfamiliar federal district, learn how judges and prosecutors view the arrest power and Rule 9 of the Federal Rules of Criminal Procedure. Rule 9(a) removes discretion from a judicial officer as to whether to issue a summons or arrest warrant, but most judges are sensitive to issues of pretrial publicity.

The arrest power is within the AUSA’s hands, so talk with the prosecutor. Articulate why the client is not violent, not a flight risk, and is not destroying evidence. If the AUSA agrees to allow surrender, document the agreement.

If the local office of the U.S. Marshals is cooperative, you may be able to bring in your client early for surrender and processing.

The media-consuming American public has a certain schadenfreude about perp walks. They are sure to continue.

Bridget Harris is an associate at the firm.