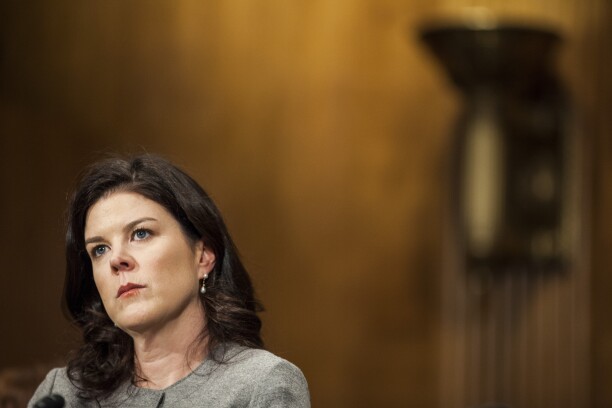 Kate O'Scannlain, solicitor of the Department of Labor, testifies during a Senate hearing in Washington, Nov. 15, 2017.
Photographer: Zach Gibson/Bloomberg via Getty Images

The Labor Department’s Trump-appointed political officials will be assured a larger role in DOL litigation involving certain divisive topics, according to an internal memo obtained by Bloomberg Law.

Solicitor of Labor earlier this year ordered her office’s civil service leadership to consult with political agency heads before filing lawsuits and related pleadings against employers. The directive applies to “key dispositive motions,” such as complaints and motions for summary judgment, that touch on controversial legal theories, religious freedom, or other significant matters in which the current administration might differ from positions the DOL took during the Obama administration.

The Feb. 27 memo does not necessarily mark a departure from the DOL legal office’s past operations, as every administration aims to ensure consistency between policy priorities at the national office and the cases brought by career litigators scattered across the country. But former officials at the Solicitor of Labor’s Office—known as SOL—flagged concerns that exposing lawsuits to excessive partisan interference could curtail enforcement of workers’ rights and sideline an office of lawyers that for decades has been given primacy over department legal advice.

“This memo to me is SOL ceding at least some of its authority,” said Patricia Smith, the labor solicitor under President Barack Obama. Some agency leaders “may be lawyers, but they’re not supposed to be acting as lawyers.”

The solicitor is the department’s top attorney, representing the agency in court actions to enforce various labor and employment laws and defend policy decisions. The office operates in an attorney-client relationship with subagencies within the Labor Department.

The memo comes amid escalating tension between the federal government’s second-largest legal shop—with about 500 lawyers nationwide—and the DOL’s political leadership at the secretary’s office and its client agencies. O’Scannlain in March joined the head of the Labor Department’s Office of Federal Contractor Compliance Programs instructing department attorneys to consult with the OFCCP before filing bias complaints against contractors.

The day before the February letter’s release, OFCCP Director Craig Leen told tech industry leaders that they are not being targeted for audits by his office. Leen made those remarks in the middle of a contentious, drawn-out legal battle between the DOL’s Western Region attorneys and tech giant , which the agency has accused of pay bias against women and minorities.

“Enforcement litigation is and remains a priority of the Department. The Solicitor and her office work hand in glove with all of their enforcement agencies in such litigation,” a DOL spokesperson said in a statement. “While there is a long history of the Solicitor’s office having the ultimate decision-making authority as to all aspects of litigation, Solicitor O’Scannlain has nevertheless made it a priority to ensure that her attorneys routinely consult with their client agencies. This process helps to ensure that enforcement litigation reflects this Administration’s policy goals and priorities.”

The Labor Department’s subagencies have always engaged in some power struggles with the Solicitor’s Office, but when it comes to legal advice on lawsuits and regulations, the SOL typically has had final say. As solicitor, O’Scannlain holds the third-highest rank in the department, a position that’s been empowered to hold command over legal advice dating back to the New Deal era.

Business attorneys have commonly complained to DOL political leaders about a regional office’s legal posture when they feel their clients aren’t getting a fair shake. It’s an open question whether this strategy will gain more traction in Washington as a result of the memo making client agencies feel more empowered to intervene.

O’Scannlain wrote that her memo is consistent with a 2016 letter from Smith, which explained that even though the solicitor’s office and the agencies are expected to agree on the “overwhelming majority of cases,” the legal office retains “ultimate decision-making authority as to all aspects of litigation.”

But Smith, when briefed on her successor’s memo, took exception.

“Clearly in all of the secretary’s orders, litigation decisions are made by the solicitor,” Smith said. “And to sit there and run every pleading by the client is a significant waste of time and resources at a department that’s already under-resourced.”

A 1940 order signed by Labor Secretary Frances Perkins, and reinforced by multiple Republican and Democratic administrations, established that DOL personnel employed as attorneys engaged in the department’s legal work shall “perform their duties under the supervision of and subject to the direction of the Solicitor of Labor.”

The solicitor’s office typically consults with its corresponding agency before filing a brief, particularly on a major case. The memo’s requirement that initial complaints should also be reviewed by the agency could stall enforcement, former DOL litigators said.

“Complaints will normally be filed as a result of an agency’s investigation, that the agency itself would have sent to the Solicitor’s office to enforce,” said Ann Rosenthal, a former associate solicitor for occupational safety and health who worked at the DOL for nearly four decades before retiring last year. “Adding the procedural step of going back to the agency before filing the complaint seems an unnecessary use of scarce resources that could better be spent on the enforcement litigation itself.”

O’Scannlain’s memo calls on the SOL leadership and their corresponding client agencies to “endeavor to resolve any disagreements, including as to factual or legal substance included in a brief, or as to style or tenor.” If the parties reach an impasse, the attorneys should elevate the dispute to O’Scannlain or one of her aides for resolution, the memo states.

The department continues to litigate the Oracle case, but it’s unclear if O’Scannlain’s memo has contributed to a different tone in SOL pleadings or could eventually soften the office’s stance in court.

The memo applies to litigation that touches on “significant legal issues,” as defined in a separate internal memo O’Scannlain wrote to career SOL leaders in August.

In the earlier mandate, the solicitor said such issues “may include” controversial legal theories, such as those that could set an important precedent; those that are likely to cause a circuit split; implicate or impinge religious freedom; or take positions that have been withdrawn or invalidated, such as on joint employment.

This definition is open to interpretation in terms of how it will be applied to ongoing litigation or decisions on whether to file new complaints. That’s why several SOL officials said it will be important to follow how the memo is actually put into practice.

“To me, the key thing is not so much putting out that message, but what’s the substance of what the Labor Department is actually doing?” said Michael Felsen, who retired last year as the department’s regional solicitor in New England, following decades of experience in various administrations. “Is the purpose of it to control the kinds of actions that are taken, that substantively are a retrenchment from more proactive worker protection activities and policies, or not?”

To contact the reporter on this story: in Washington at bpenn@bloomberglaw.com