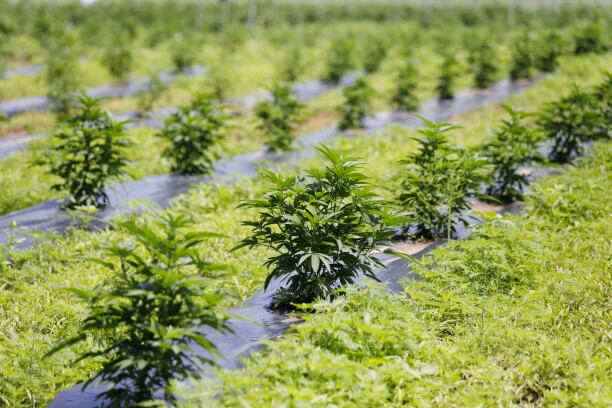 A large group of cannabis plants is grown outdoors in a field in Canada. Acreage Holdings Inc., which is domiciled in British Columbia, has hired Kristin Jordan as its director of real estate.
Cole Burston/Bloomberg

Acreage Holdings Inc., a publicly traded company with a diverse cannabis portfolio, has hired Kristin Jordan as its director of real estate.

Jordan joins Acreage as its real estate footprint is growing. The cannabis company recently bought a New Jersey dispensary and has created a real estate investment trust. Jordan was previously senior counsel at Greenspoon Marder, a Florida-based law firm that was an early mover in building out a cannabis and hemp law practice.

Jordan joined Greenspoon Marder’s New York office in January after serving as chair of the cannabis and hemp practice at Newman Ferrara, a law firm that hired her as of counsel in 2015. At Newman Ferrara, Jordan started Mannada LLC, a women-owned event planning and production company serving cannabis industry clients, and became a co-founder of the Cannabis Cultural Association, a New York-based nonprofit working to bring marginalized communities into the legal weed movement.

Jordan did not return a request for comment about her new role at Acreage, which she joined in November. An Acreage spokesman told Bloomberg Law that Jordan won’t be part of the law department but wouldn’t comment further on Jordan’s role at the company.

Acreage, formerly known as High Street Capital Partners LLC, is domiciled in British Columbia but has its corporate headquarters in New York. Acreage’s general counsel is James Doherty III and the company added a senior deputy general counsel last year in Michael Garofola, a former federal prosecutor who has appeared on ABC’s “The Bachelorette” and two spin-offs.

Earlier this year, Acreage agreed to be acquired by Canada’s Canopy Growth Corp. in a $3.4 billion deal that could create a cannabis giant, although the merger’s closure is contingent upon the U.S. federal government legalizing marijuana for recreational use.

Acreage happens to be one of the more politically connected cannabis operators, with Squire Patton Boggs senior strategic adviser and former U.S. House Speaker John Boehner serving as a member of its advisory board, along with former Massachusetts Gov. William Weld and former Canadian Prime Minister Brian Mulroney, the latter now a senior partner at Norton Rose Fulbright in Montreal.

Records on file with the U.S. Senate show Acreage paid $20,000 to retain Washington-based government relations firm Capitol Counsel in October to lobby on “issues relating to cannabis law firm and to the Safe Banking Act.” The Liaison Group, a cannabis advocacy outfit owned by Greenspoon Marder, Jordan’s former law firm, was paid another $60,000 by Acreage in the first half of this year to lobby on cannabis banking regulations, according to Senate records.

Other companies have moved to ramp up their in-house compliance capabilities as legalized recreational marijuana sales expanded to Illinois and Michigan on Dec. 1.

ElleVet Sciences, a Portland, Maine-based company that claims to be the first to make hemp-based cannabidiol products for pets, announced in early November its hire of Stacey Evans as general counsel. Evans, a food, drug, and animal health law expert, was a longtime employee of the Federal Maritime Commission who most recently operated her own consultancy in Maryland.

Outside the U.S., Franziska Katterbach took over in October as managing director and chief legal officer of Toronto-based Khiron Life Sciences Corp., an integrated cannabis company with operations in Latin America. Katterbach, a former senior associate at Dentons in Frankfurt, Germany, joined Khiron after a year as European legal director for Canopy Growth-owned Spectrum Cannabis.