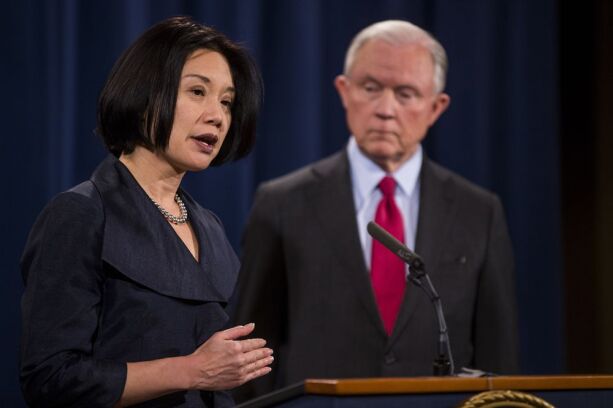 U.S. Attorney Jessie Liu’s recent withdrawal from the running for the No. 3 job at the Justice Department after criticism of her past affiliation with the National Association of Women Lawyers has worried advocates who believe women and minority attorneys might begin to think twice about joining identity-based organizations.

Liu, the U.S. attorney for the District of Columbia, withdrew due to fierce criticism, particularly from Sen. Mike Lee of Utah. The Republican senator took issue with the fact that NAWL expressed support for abortion rights while Liu was its vice president. Liu has said she later left the group over its politics.

Advocates for women and minorities in the legal profession worry that in a more polarized political environment female and minority lawyers may risk being sidelined in their careers based on their association with groups like NAWL, regardless of whether they join these groups to advocate or merely to network.

“While many of these organizations lean left at some point in time and on some issues, that’s kind of expected given that identity-based organizations focus on things like equal access to opportunities and equal rights,” said Jaime Santos, an appellate attorney at Goodwin Procter, who is involved in improving workplace harassment policies in the federal judiciary. “But that doesn’t make them fringe groups.”

Liu served as vice president of NAWL from 2005 to 2006. During that time, the group wrote a brief opposing the nomination of Justice Samuel Alito to the Supreme Court, in part due to his stance on reproductive issues and women’s rights. NAWL has also publicly supported abortion rights.

Liu, a member of the Federalist Society as well as Trump’s presidential transition team, disagreed with NAWL’s stance on Alito and signed a separate letter supporting Alito’s nomination before leaving the group altogether.

Nevertheless, Lee opposed Liu’s nomination “due to her record on life issues including her association with NAWL,” according to his spokesman Conn Carroll. Carroll declined to provide other examples of Liu’s record on abortion.

Lee, a former clerk for Alito, reportedly sparred with Attorney General William Barr, who supported Liu’s nomination. But Liu withdrew her name from the running saying she did not want to be a distraction.

Advocates for women and minorities in the legal profession say they’re worried that Liu, in many ways a textbook conservative, was blocked because of her association with a women’s group whose positions she apparently didn’t even share.

Pat Gillette, JAMS mediator and arbitrator, and former NAWL board member, views Lee’s opposition to Liu as “a terrible comment on what’s happening in our political system right now.”

“What I fear is happening is that [Lee] doesn’t even know what NAWL is,” said Gillette. “He only knows it’s an association of women lawyers, so he assumes she must be some liberal commie leftist who’s cloaking herself in conservative views— because it just doesn’t make sense given the other organizations she’s a member of.”

NAWL’s stated mission is to “to provide leadership, a collective voice, and essential resources to advance women in the legal profession and advocate for the equality of women under the law,” according to its website.

In a statement issued on Monday, NAWL said the objections against Liu were “misplaced” and “improperly used to derail [her] nomination.”

“Those who seek to serve in government should be encouraged, not shamed, to serve in bar associations and other organizations that promote women in their chosen professions and advocate for equality under the law and diversity and inclusion in the workplace,” the statement said. “Chilling such service is a disservice to this nation and the freedoms we hold dear.”

Debbie Epstein Henry, a consultant on women’s issues in the law, also expressed concern. The kind of scrutiny that Liu experienced risks “deterring and silencing women and people of color from engagement in some activities and seeking certain affiliations for fear that it will hinder their long term goals,” she said.

Jean Lee, president and CEO of the Minority Corporate Counsel Association, said she believes it is impossible to look at Liu’s failed nomination without looking at her race or gender.

“They picked on the one little thing they could find on what appears to be a perfect conservative nomination to the Justice Department,” she said. “To me it feels like a way to exclude a woman, specifically a woman of color.”

“This is where it’s important for allies to support organizations like MCCA or NAWL, for sake of the profession,” Jean Lee said. “To speak up and say, ‘these are great organizations and acknowledge the challenges that women and people of color face in the legal profession and all other industries.”