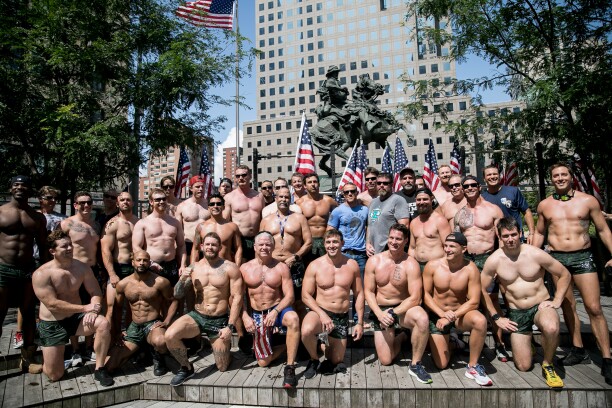 McCarter & English associate and former Navy SEAL William Brown led a unique fundraising effort this past weekend by organizing a group of former and active duty SEALs to complete the first-ever legally sanctioned swim across the Hudson River.

The associate in McCarter & English’s bankruptcy and restructuring practice was part of a group of 34 SEALs who swam a little over two miles on Aug. 3 to raise money for the GI Go Fund, a nonprofit that helps veterans in need.

The swim began early Saturday morning at Liberty State Park in New Jersey and ended in Battery Park in lower Manhattan with stops along the way at the Statue of Liberty and Ellis Island for pushups and pullups.

From Battery Park, the group then jogged to One World Trade Center where a ceremony was held at St. Nicholas Greek Orthodox Church and National Shrine near the 9/11 Memorial.

“It was epic, for sure,” said Brown, who noted the swim took a little over two hours. “I’m still on cloud nine.”

The path that brought Brown to McCarter & English in 2017 began in the U.S. Navy over two decades ago. In 2000 Brown became a member of SEAL Team 8 where he served until 2005. He then attended Rutgers University followed by Rutgers School of Law, graduating with his law degree in 2014.

Brown said he got the idea for the Navy SEAL Hudson River Swim and Run from struggles he faced upon leaving his life in the Navy.

“When I got out of the military, like a lot of guys, I had a tough transition,” Brown said. But he found inspiration from seeing SEALs across the country performing athletic feats for a good cause.

Brown has held events like this before. During his undergraduate years at Rutgers University, Brown completed a 65-mile run from the school’s campus in Camden to New Brunswick, which raised over $20,000 for a veteran’s scholarship fund that he founded at the university, Veterans for Education.

He’s also served as an advocate in other ways. In law school, Brown fought a war of words with then- Gov. Chris Christie over the plan sanctioned by Christie’s administration to merge make Rutgers University’s branch in Camden, New Jersey part of Rowan University.

To put together the Navy SEAL Hudson River Swim and Run, Brown reached out to several of his friends in the SEALs and in law enforcement like the New Jersey state police, FDNY, NYPD and the New York and New Jersey Port Authority—some of whom were former SEALs themselves. They liked the idea and promptly backed the event.

Eventually Brown connected with GI Go Funds, which was founded in 2006 in memory of Lt. Seth Dvorin who was killed while serving in Iraq. The organization aids all military veterans, helping them find employment, housing, educational and health benefits.

“A lot of times I think homeless veterans are left behind in our society,” Brown said. This swim was a way to try and help them that is complimentary to the SEAL team motto of never leaving a man behind, he added.

“For us, not leaving someone behind is a bond that we have with each other,” Brown said.

McCarter & English was also 100% behind Brown in the endeavor, he said. Sheila Calello, the chair of the firm’s bankruptcy and restructuring practice, attended several initial planning meetings with Brown and guided him during the process.

The firm was the event’s first corporate sponsor and provided the funds for housing the event’s participants, in addition to a $13,500 contribution to the GI Go Fund. Several of Brown’s colleagues were also there on Sunday cheering him on.

Though the swim is over, those interested can still donate via GI Go Fund website to help veterans get the skills and shelter they need, Brown said.

“SEALs are really patriotic, good men and they’re out there trying to make a positive difference and that’s what this swim was about. It was our way to try to help other veterans who kind of having a tough time through that transition process,” Brown said.

“And at the same time paying respect in our way as SEALs to the values that our country really stands for, the things that bring us all together — freedom, civil liberties [and] diversity.”