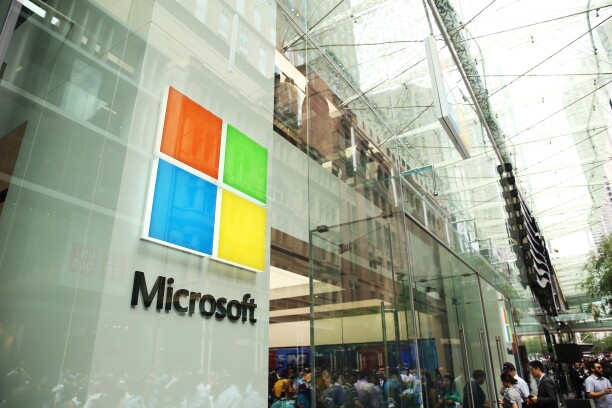 The Microsoft Corp. logo is displayed in the window of a company's store.
Photographer: Brendon Thorne/Bloomberg via Getty Images

The relationship between Microsoft Corp. and Integreon Inc. has grown dramatically since the software giant took a chance on the nascent alternative legal service industry a decade ago, but there’s disagreement about whether such a model will take off widely enough to truly disrupt law firms.

What started in 2009 as a seven-member group of Integreon lawyers and paralegals in North Dakota handling small, English-language procurement contracts for Microsoft has expanded to a team of more than 80 based in offices across the continents who review 20,000 contracts a year in 15 languages.

Partnerships on the scale of Microsoft’s and Integreon’s remain the exception in an industry that some see lurching toward disruption while others argue the hype around alternative providers is overblown.

One crucial factor in getting more law departments to adopt alternative service providers will be if leaders can overcome doubts about outsourcing legal work to a relatively new type of vendor.

“I consider the biggest holdback in our business to be the individual lawyer’s mindset of ‘I wish my cheese didn’t move,’” said Liam Brown, who co-founded Integreon then left and launched another company in the space, Elevate Services. “The change management piece is easily the thing that is most likely to slow down a general counsel.”

To hear Microsoft and Integreon tell it, their relationship has steadily grown despite the risks because they took change step by step.

In 2009, Integreon won a bid to help Microsoft draft, negotiate, review and track a relatively small portion of its procurement contracts, in an early attempt at life cycle contract management.

The program started with a small office in Fargo, N.D., which was more expensive than an offshore office. But the software company wasn’t yet comfortable moving that small portion of its legal work overseas, said Mark Ross, global head of contracts, compliance and commercial services at Integreon.

“It was all new, and change is scary,” said Kris Jolma, a nearly 20-year veteran of Microsoft’s procurement department, recalling the start of the partnership.

The comfort level began to grow. In 2011, Integreon and Microsoft expanded their relationship overseas by launching an office in Bristol, England, and another office in Mumbai followed in 2014.

The same year Integreon took over the operation of a help desk to support a new contract life cycle management platform Microsoft had adopted.

“I’ve been in the ALSP space since before the acronym developed, and I’ve never worked with a client that has been as fixated on collaboration, on innovation and on driving us to be continually pushing the envelope,” Ross said. 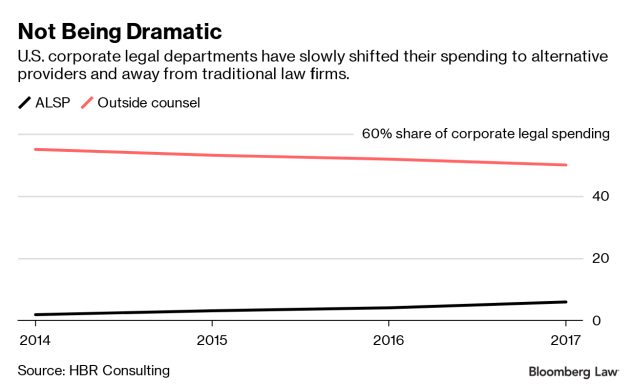 “These are small percentages, but if you look at the overall trend we are anticipating that ALSPs are going to continue to take up some of the work that is going to law firms,” said Lauren Chung, a managing director at HBR Consulting.

Large companies like Microsoft tend to be at the vanguard in working with alternative service providers as their legal departments often have work optimal for ALSPs that’s high-volume and repeatable. In-house teams at tech companies especially seem willing to embrace tech-driven solutions like ALSPs.

A 2018 survey by Thomson Reuters says the alternative legal service provider market had grown to $10.7 billion in 2017 and it expects the market to grow to $20 billion within three years.

Still, the country’s 100 largest law firms last year had their most successful financial year in nearly a decade, growing their top line by 8% according to AmLaw’s rankings. And other data suggest many legal departments still do not see alternative providers as viable options for large chunks of legal work, especially when the work is more complex.

Among companies that planned to decrease their outside counsel spending in 2019, a mere 15% said they would turn to non-law-firm vendors to pick up the work, according to a survey of law departments released in November by consultancy Altman Weil Inc. Those law departments were much more likely to keep that work with in-house lawyers or to negotiate lower prices with their current law firms.

Many law department leaders are reluctant to trust outsourcing firms with access to their revenue-generating contracts, said Rees Morrison, an Altman Weil principal. And general counsel largely view it as safer to seek discounts from their current law firm providers.

“In the end, so often I think law departments just say, ‘Maybe we’ll get a less expensive law firm to work on it,’” Morrison said. “And I don’t know if any of those concerns will alleviate over time.”

Aric Press, a former editor-in-chief of The American Lawyer, is often hired by large law firms to interview key clients about firm performance, client needs and the legal services market. Apart from hearing clients discuss their use of vendors for document review, he said clients “never” discuss the possibility of hiring alternative providers.

Still, some Am Law 100 firms appear to view the alternative service provider market as a threat. Greenberg Traurig, last week announced it was launching an innovation subsidiary in an admission that the traditional law firm model was failing to keep up with ALSPs.

As technology becomes more important for routine legal tasks, James W. Jones, a senior fellow at the Center on Ethics and the Legal Profession at Georgetown Law, said law firms will fall behind alternative service providers, which have the advantage of tapping financial markets to raise capital.

“I don’t see signs that many law firms are putting in the investments in infrastructure and systems that are necessary to match what [ALSPs] are doing in terms of efficiency and service delivery,” Jones said. “It just remains to be seen how much of the market these ALSPs will be able to consume.”

This week, Elevate Services announced it had raised another $25 million in financing through a private equity firm. The law company expects its revenue will grow to nearly $200 million by 2023, Bloomberg Law reported, which would equate to about 33 percent growth per year. About 150 law firms last year had sales that high, but none expect top-line growth rates near Elevate’s. 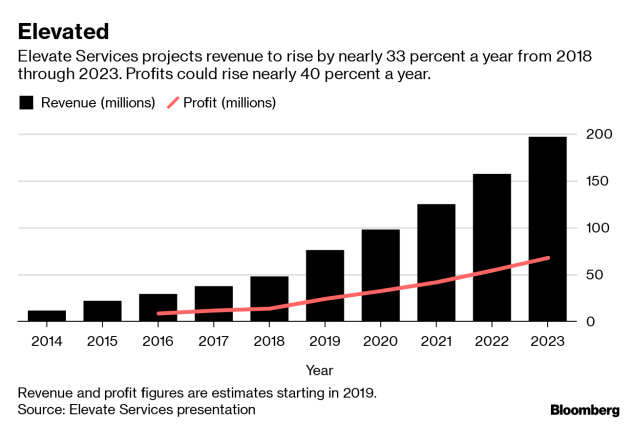 Meanwhile, Integreon and Microsoft are looking to the future. Tom Orrison, Microsoft’s director of legal operations, said Integreon will be involved in helping the legal department adopt faster and more accurate AI-based contract review capabilities that will allow it to capture more data about clauses.

It’s currently too costly to do that kind of work manually in low-risk contracts, Orrison said. But the use of Integreon and new technologies will make it worthwhile for Microsoft and speed the closing of procurement deals, he explained.

That is one example of how ALSPs—by driving down the cost of the services they provide—may be able to grow their offerings while law firms remain focused on the top-end of the market.

“I think we are in a state of rapid change and advancement,” Orrison said, “especially with the technology being developed and the growth of the alternative legal service providers.”

To contact the reporter on this story: Roy Strom in Chicago at rstrom@bloomberglaw.com