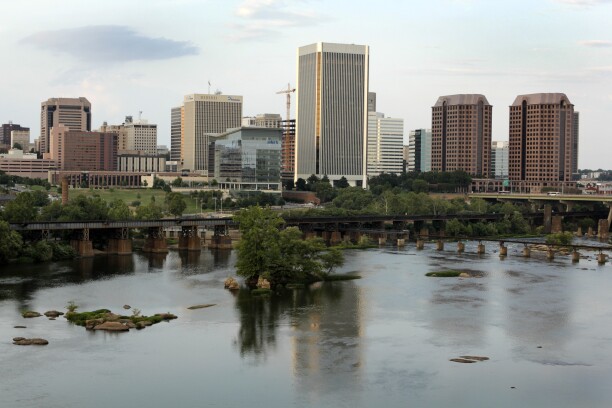 The Richmond skyline is viewed from across the James River on July 23, 2014 in Richmond, Virginia. The city is the home base of law firm LeClairRyan.
Photo by Jay Paul/Getty Images

The diaspora from the soon-to-be-defunct LeClairRyan has expanded as Miles & Stockbridge picked up a five-lawyer team and Baker Donelson landed four others.

Miles & Stockbridge’s new team in Richmond, Va., will be led by LeClairRyan partner Thomas Wolf and includes Gretchen Bryd, who joins as a partner, Joseph Rainsbury as of counsel, Kenneth Stout as an associate, and Jason Goldsmith as a law graduate.

The firm’s strategy has been to dominate the mid-Atlantic region and has been looking to expand in the Richmond area for years, said Chair Nancy Greene.

It spoke with groups and individual lawyers to find the right match and as the situation deteriorated at LeClairRyan, the firm circled back to Wolf, she said.

“This one was one that we pursued in the sense of we knew there was an opportunity and he was looking, so it was a really good fit for our firm,” Greene said.

Richmond-based LeClairRyan struggled amid slipping revenue and partner exits, and announced plans to dissolve on Aug. 7. Its lawyers have been looking for new homes.

Baker, Donelson, Bearman, Caldwell & Berkowitz announced that it had picked up four attorneys and four additional IP professionals from LeClairRyan.

Teskin has more than 30 years of patent law experience, working with companies in the biotech, pharmaceutical, and chemical industries. Kalafus, who holds a doctorate in structural and computational biology and molecular biophysics, concentrates primarily on the biotech/life sciences field.

Gretchen Jackson and Peter Zuk will join the firm’s product liability and mass tort group. Jackson, a shareholder, will work in Falls Church, Va. Zuk, listed in a firm announcement as an attorney, will work in Washington.

“They bring substantive experience that enhances our offerings in both intellectual property and product liability and mass tort,” Baker Donelson Chairman and CEO Timothy M. Lupinacci said in the announcement. “Their addition to our D.C. and Virginia locations furthers our commitment to continued growth in those competitive markets.”

The firm also will relocate Carl Schwertz from Tysons Corner in Virginia to its new office, which temporarily will be located in Richmond’s SunTrust Center until a permanent space is built.