“Supporting Justice: A Report on the Pro Bono Work of America’s Lawyer” compiled survey answers from more than 47,000 attorneys in 24 states about their pro bono work in 2016.

The report’s results, released in April, also confirmed the experience of pro bono veterans that large law firms make it easier for attorneys to do pro bono.

The older/younger divide was unexpected because “I see a lot of activity and interest from associates at larger law firms,” Brenna K. DeVaney, director of pro bono programs at Skadden, Arps, Slate, Meagher & Flom in Chicago, told Bloomberg Law. 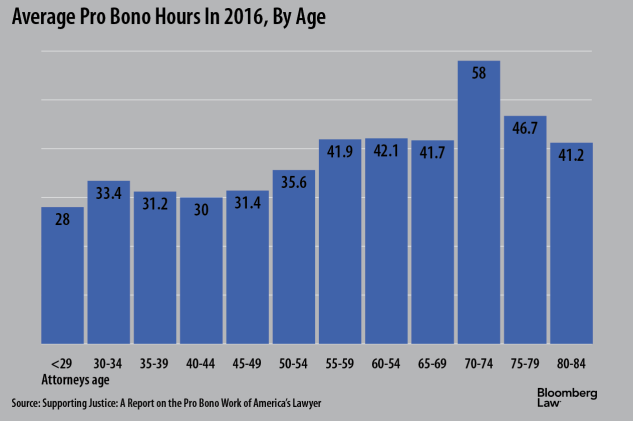 But it makes sense that more senior and retired attorneys have more capacity to do volunteer work or oversee pro bono cases, DeVaney said.

Many attorneys in their 70s are retired “and have chosen to dedicate much of their time to pro bono work,” the report said.

Younger attorneys at Akin outperform older attorneys two to one when it comes to pro bono hours, he said. He guesses this is because they don’t have the same family or outside obligations.

Reasons the report cited for not doing pro bono included lack of time, commitment to family, or lack of skills in specific practice areas.

But Schulman and DeVaney stressed their experience is from a big-law vantage and this might be different for those at smaller firms.

In fact, attorneys at large firms did more pro bono than those at smaller ones, the report said. 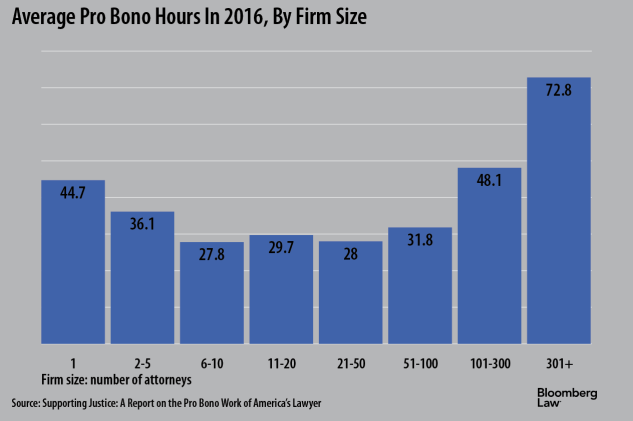 This is because big firms often have the capabilities and resources to make pro bono work accessible and manageable, DeVaney said.

They find clients, do conflicts checks, set up training, and keep track of the hours worked, Cassino said.

Large firms have the infrastructure and support to make it happen while small firms have to sacrifice a lot more to do pro bono, Schulman said.

Schulman and DeVaney agree that the report’s most “encouraging” and important finding is that 81 percent of attorneys have provided pro bono services at some point in their lives.

But there’s still “an unacceptable access to justice gap” and more needs to be done, she said.

To contact the editor responsible for this story: Jessie Kokrda Kamens at jkamens@bloomberglaw.com