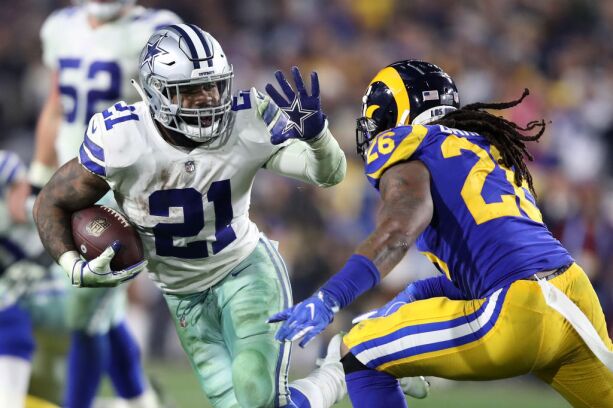 Ezekiel Elliott of the Dallas Cowboys runs with the ball against Mark Barron of the Los Angeles Rams in the NFC Divisional Playoff game at Los Angeles Memorial Coliseum on Jan. 12, in Los Angeles.
Photographer: Sean M. Haffey/Getty Images

The Los Angeles Rams want the U.S. Supreme Court to intervene in its dispute with St. Louis over the team’s 2016 relocation back to the City of Angels.

The Rams on Sept. 24 asked the justices to halt a state court ruling requiring the franchise to litigate the dispute in the courts, rather than through arbitration.

The Supreme Court in recent years has been friendly to parties seeking to keep suits out of court by broadly interpreting the Federal Arbitration Act.

The Rams seek to capitalize on that momentum, saying that the “case marks the latest effort by a lower court to subject an arbitration agreement covered by the Federal Arbitration Act (FAA) to disfavored treatment.”

The request was made to Justice Neil Gorsuch, who fields emergency requests from the U.S. Court of Appeals for the Eighth Circuit, which includes Missouri.

Gorsuch could ask St. Louis to respond to the request before ruling on it or referring it to the full court for consideration.

Clement has been involved in other NFL disputes. He previously represented the NFL in its potentially billion dollar concussion class settlement as well as in Tom Brady’s four-day suspension over “Deflategate.”

The 2016 relocation prompted several suits. This one’s related to a claim by St. Louis that the move violates the NFL’s relocation standards.

The Rams say the 1995 agreement covering their initial move from Los Angeles to St. Louis requires that an arbitrator decide the correct forum to litigate the relocation standards—an arbitrator or a court. They point to American Arbitration Association rules requiring that such gateway issues be decided by an arbitrator.

But the city notes that such rules weren’t in effect until 2003—years after the initial relocation agreement.

In June, the Rams settled separate litigation with St. Louis fans and ticket holders over the move.

(Updates with Clement representation of NFL in previous litigation)

To contact the reporter on this story: in Washington at krobinson@bloomberglaw.com