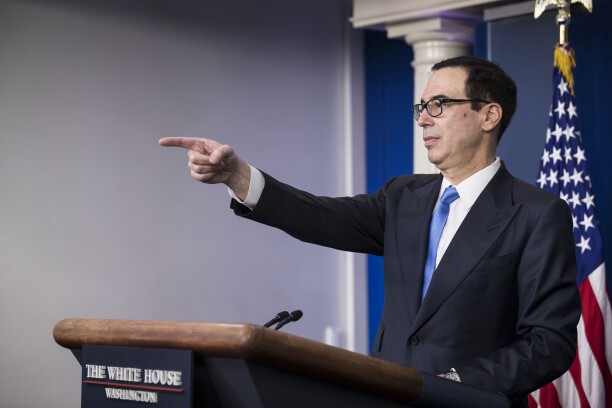 Law firms big and small are benefiting from a surge in sanctions-related defense and advisory work as the U.S. regime grows more complex and enforcement gets tougher under the Trump administration.

Driving demand are recent changes to nearly two-dozen sanctions programs—including Cuba, Venezuela and Iran—and a greater threat of both civil and criminal penalties. Companies, especially those with cross-border operations, are flooding law offices with requests for help.

“We have certainly seen an uptick in enforcement defense, internal investigations and compliance questions from clients,” said Kevin McCart, a partner in the Washington, D.C. office of Squire Patton Boggs. The firm has seen double-digit revenue growth in sanctions and anti-money laundering-related work during each of the past several years.

Some firms are intensifying the hunt for top-tier legal talent with the hope of beefing up their sanctions and export control practices and adding new clients.

“There has been so much activity and so much increased enforcement in this area,” said Jonathan Poling, a partner at Akin Gump Strauss Hauer & Feld LLP.

“So many more clients now have a greater appreciation for the dangers and risks of getting this wrong that law firms are just incredibly active in looking for good sanctions, export control practitioners.”

More companies are in need of help defending against government probes and negotiating resolutions, given a recent swell in fines issued by the Treasury Department’s Office of Foreign Assets Control (OFAC) and a greater threat of criminal penalties.

Over the past several years, economic and trade sanctions have become one of the primary tools used by the government to punish foreign countries and individuals. This is especially true of the Trump administration.

The $1.28 billion in civil penalties and settlements issued by OFAC this year is already the largest dollar amount since at least 2008, and is expected to grow. 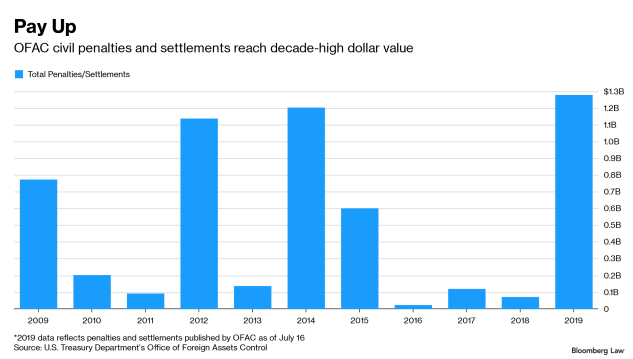 OFAC has published 18 penalties and settlements so far this year, a far cry from the single action it made public during the same period in 2018. The office is on pace to best the 27 total actions published in 2009, 2010 and 2013 — the most seen in any given year throughout the past decade.

Compliance has also grown far more complex. Of the 30 active U.S. sanctions programs listed by OFAC, 14—or about 47 percent—have been updated this year, including Cuba, Venezuela and Iran. Twenty-three programs, or about 77 percent, have been altered since the start of 2018.

Some of those changes sparked compliance questions for businesses and industries once thought outside the scope of traditional sanctions activity.

An uptick in the expansion and evolution of various OFAC sanctions programs is “generating a lot of client inquiries” separate from the enforcement side of the equation, said Ben Wood, a partner at Squire Patton Boggs.

Last month, Squire brought on Claiborne Porter, a former financial crimes prosecutor who worked on money laundering and sanctions cases and investigations at the Justice Department.

The More, the Merrier

Even smaller, boutique firms are experiencing a spike in demand.

“The recent developments with sanctions have been good for business overall for all law firms with a focus in this area,” said Hal Eren, lead partner at the Washington, D.C.-based Eren Law Firm.

According to Eren, about a third of his time is spent on defending clients against OFAC enforcement matters, another third is dedicated to obtaining OFAC licenses or other forms or relief, and the final portion is spent providing compliance advice.

Other attorneys focused on sanctions are spending more and more time on criminal matters, as the Justice Department, the FBI and other agencies crack down on sanctions evasion and related issues.

“About 40 percent of my time is focusing on matters where there is some sort of criminal exposure,” said Poling, of Akin Gump. “I would say there is actually more activity it seems around cases that have criminal risk than those with just civil risk.”

Poling’s remaining time is split between “day-to-day regulatory guidance” and the disclosure and remediation of certain violations.

Wood, of Squire Patton Boggs, said he and his colleagues anticipate sanctions work will continue to take up more of their time during the next couple of years, if not longer.

“When you see a potential military strike on Iran get walked back at the last minute in favor of tightening and strengthening sanctions, it really is a validation of how we’ve seen sanctions become the first resort for U.S. foreign policy,” said Wood.

“We don’t see that trend ending any time soon, so we don’t see an end to the increased need for sanctions-related legal services in both enforcement and advisory.”

To contact the reporter on this story: in Washington at jrund@bloomberglaw.com