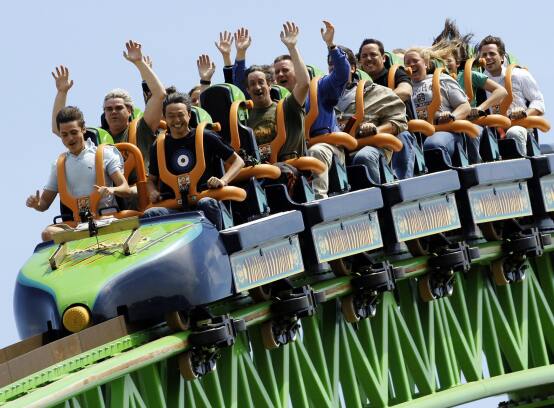 The new year will bring new leadership to the law departments at Six Flags Entertainment Corp. and Harley-Davidson Inc., after both companies disclosed that the nearly decade-long run of their respective in-house legal chiefs will soon end.

Six Flags, which is based near Dallas, said that Lance Balk had informed the amusement park operator Nov. 13 of his intention to retire as executive vice president and general counsel “on or after” Feb. 28, 2020. A transition and retirement agreement executed between Balk and Six Flags states that he will receive a base salary of $10,000 per month for the first year following his retirement, during which time he will serve as an of counsel adviser to the company, according to a Nov. 15 securities filing by Six Flags.

That sum will be reduced to $5,000 per month in the second year of the agreement, according to the filing. Balk, a former Kirkland & Ellis partner who lives in the Chicago suburb of Lake Forest, Ill., will also be provided with an office and administrative support at a Six Flags corporate office in nearby Gurnee, Ill.

A proxy statement filed by Six Flags earlier this year showed that Balk earned $1.3 million in total compensation from the company in 2018. Balk joined Six Flags as general counsel in 2010, shortly after the company emerged from bankruptcy protection. He did not return a request for comment about his future plans or potential successor as Six Flags’ legal chief.

Nor did Paul Jones, who is set to leave his role as chief legal and compliance officer at Milwaukee-based motorcycle maker Harley-Davidson on Nov. 29. Jones, whose securities filings show he took home $2.27 million in total compensation from the company last year, was hired by Harley-Davidson in 2010 after he spent nearly four years as general counsel at electric motor manufacturer Regal Beloit Corp.

In a Nov. 15 filing, Harley-Davidson wished Jones well in “his next professional ventures” and said it has begun a search for his replacement. Bloomberg Law reported this week that Harley-Davidson will have to face claims in Utah over a fatal tire blowout.

Maria “Masha” Trainor, a former K&L Gates partner serving as vice president, general counsel, and corporate secretary at Ampco-Pittsburgh Corp., is poised to leave the specialty steel manufacturer as part of a corporate downsizing. The Carnegie, Pa.-based company disclosed in a Nov. 20 securities filing that Trainor would depart its ranks as a “result of a reduction in force.”

Trainor, who was born in Russia and emigrated to the U.S. at 17, joined Ampco-Pittsburgh in mid-2015. She did not return a request for comment. Ampco-Pittsburgh said that Trainor is eligible for a severance package that will allow her to be paid for up to one year. In other recent developments:

The Episcopal Church has a new top lawyer. Suzanne Baillie, a Harvard Law School graduate and former associate at Debevoise & Plimpton in New York, has been named interim general counsel for the church. Baillie did not return a request for comment about her new role, which was announced in a statement by Episcopal Church Presiding Bishop Michael Bishop.

Baillie, who from 2003 to 2008 served as counsel for the Domestic and Foreign Missionary Society, the Episcopal Church’s corporate and legal arm, replaces Polsinelli partner Douglas Anning as interim legal chief. Anning, who is based in Kansas City, Mo., also did not return a request for comment. Curry’s statement said Baillie replaced Anning as part of the church’s plan to hire a full-time chief legal officer. In other developments: