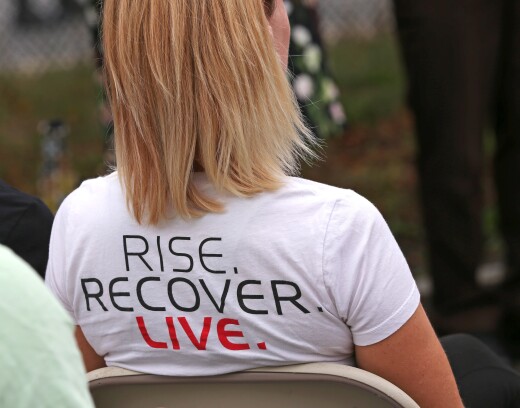 A member of a support group watches in 2018 as Boston Mayor Martin Walsh announces next steps in the city’s lawsuit against the pharmaceutical industry over the opioid epidemic.
Photo by David L. Ryan/The Boston Globe via Getty Images

States are expected to get a windfall in settlement funds from the hundreds of lawsuits that have been filed against opioid manufacturers and distributors, but there are doubts about whether the money will actually go to treat and prevent opioid addiction.

They’ve seen settlements squandered before, back when states tried to hold Big Tobacco accountable for misleading Americans about the addictive and deadly effects of smoking. Lawsuits against opioid makers like Purdue Pharma LP and Johnson & Johnson are looking a lot like those battles with tobacco in the 1990s.

Nearly every state is suing Purdue Pharma for allegedly persuading doctors to prescribe more opioids through false and deceptive marketing campaigns that downplayed the addictiveness of the powerful painkillers, originally prescribed to people with cancer, a terminal illness, or acute short-term pain.

As a result of these alleged misdeeds, states like Oklahoma say they’ve seen a surge in opioid overdose deaths, addiction, and dependence that has taken a devastating toll on society and the national economy.

The Centers for Disease Control and Prevention estimated in 2013 that the total economic burden of prescription opioid misuse in the U.S. was $78.5 billion a year in increased health care, substance abuse treatment, and criminal justice costs.

Purdue and Johnson & Johnson have denied the accusations. Responding on its website to the litigation, Purdue says the crisis cannot, as a matter of law, be tied to one company that manufactures a small fraction of the prescription opioids in the U.S.

While the company did not act alone, states said it played a role in the epidemic and now must pay for the damage it caused.

“I think the opioid litigation has taken a lot out of the tobacco playbook, but one aspect that is different comes from the concern about how the tobacco money was spent,” said Abbe Gluck, a professor of law and faculty director of the Solomon Center for Health Law and Policy at Yale Law School. “Some states used it for prevention and treatment, and some states used it for other things.”

Purdue Pharma has already agreed to pay Oklahoma $270 million in the first state settlement in litigation stemming from the public health crisis. Teva Pharmaceuticals, meanwhile, has agreed to pay the state $85 million for its hand in fueling the epidemic.

Over 1,800 lawsuits against Purdue Pharma, filed by cities, counties and Native American tribes, have been consolidated into multidistrict litigation in the U.S. District Court for the Northern District of Ohio. A trial is scheduled to begin in October, and attorneys for the cities and counties are seeking court approval to certify a class of local governments pushing for a massive nationwide settlement.

The motion for a negotiation class mapped out steps toward reaching an agreement that would allow cities and counties to opt in or out of the settlement.

Given the sheer number of cities and counties that have sued or are likely to, the attorneys told the court that one-by-one approval of a comprehensive resolution is likely impossible in terms of logistics.

“A cohesive negotiating group of cities and counties is essential because only a collective negotiating front is able to offer the prospect of global peace, which typically results in what is termed a ‘peace premium’ in mass harm litigation,” they said in their request.

When several states sued cigarette manufacturers in the 1990s for misleading Americans about the deadly side-effects of smoking, it led to a master settlement agreement with 46 states in 1998.

Under the agreement, tobacco companies are required to make annual payments to the states in perpetuity, with payments estimated at $246 billion over the first 25 years, according to data from the Campaign for Tobacco-Free Kids.

Though the state attorneys general said then that they were settling to achieve significant funds on prevention and cessation programs to reduce the number of people addicted to tobacco, very little of the money has actually gone to that effort.

Over the past 20 years, states have spent just 2.6 percent of their total tobacco-generated revenue on tobacco prevention and cessation programs, according to a campaign report. During that time, states received $453.4 billion in tobacco revenue—$156.7 billion from the tobacco settlement and $296.7 billion from tobacco taxes—but they have allocated only $11.8 billion to tobacco prevention and cessation programs, the report said.

Much of the money has instead gone to make up other funding shortfalls.

“Each state legislature got to decide, so it varied widely state to state,” said Joelle Lester, director of the Commercial Tobacco Control Legal Consortium at the Public Health Law Center, which is located at the Mitchell Hamline School of Law in St. Paul, Minn.

“When times are tight in states and legislatures are making tough decisions, it’s very tempting to use the funds to close other budget gaps,” Lester said.

Afraid the past will be repeated, Democrats are calling for any and all funding won in the litigation stemming from the opioid epidemic to go to legitimate public health efforts that combat opioid abuse and prevent addiction.

“The diversion of yesterday’s tobacco settlement funds to purposes totally unrelated to public health should be a cautionary tale,” Democratic Sens. Dick Durbin (Illinois) and Sherrod Brown (Ohio) wrote in an op-ed for Cleveland.com in May. “If the industries that fueled this crisis are held to account for the damage they have caused, their restitution should be devoted to helping our nation heal.”

But some fiscal policy experts just don’t see it happening.

It Won’t Be Easy

If there is a cardinal lesson to be learned from the tobacco litigation, health advocates say it’s to designate in writing how the money has to be spent.

“You can’t say these suits are about actually helping the people harmed unless you direct the funds and mandate the funds to be used for those purposes,” said Matthew Myers, president on the Campaign for Tobacco-Free Kids.

While Myers said settlement agreements should specify how funds are used, attorneys say those provisions will be difficult to enforce in some states.

Some state attorneys general don’t have the power to allocate funds that belong to the legislature, Lester said. While a master settlement is a contract between parties, she said it can’t change a state’s power structure.

Gluck said it remains to be seen how many guardrails state attorneys general will be able to set on settlement spending.

“There’s a potential power struggle down the road here when you have state attorneys general bringing cases and maybe getting money, and then the money has to be distributed by the legislature,” Gluck said. “Members of a legislature may have other priorities.”

Oklahoma Attorney General Mike Hunter structured the state’s settlement with Purdue Pharma so the bulk of the money would go toward research and treatment programs. In response, unhappy legislators passed a law that requires future settlements negotiated by the attorney general to go to the state treasury.

To contact the reporter on this story: in Washington at lwheeler@bloomberglaw.com

To contact the editors responsible for this story: at fjohnson@bloomberglaw.com; at csaenz@bloombergtax.com