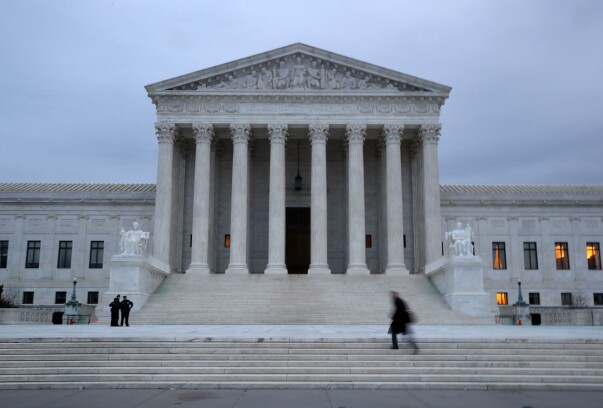 The question of when taxpayers can challenge regulations is significant enough that the Supreme Court may end up needing to address it.
Photographer: Mark Wilson/Getty Images

The Supreme Court may have to grapple with the question of when taxpayers can challenge Treasury regulations amid growing debate in the lower courts.

The Anti-Injunction Act prohibits lawsuits trying to restrain officials from assessing or collecting taxes. CIC Services LLC argued the act didn’t block its suit against the IRS over a requirement to report micro-captive insurance transactions. The firm plans to appeal to the Supreme Court after it was denied review by the U.S. Court of Appeals for the Sixth Circuit late last month, its attorney told Bloomberg Tax.

If the Supreme Court were to take up the case and rule for CIC Services, it could open up certain Treasury Department and IRS actions to more judicial scrutiny.

But whether or not it takes up the case, the question of when taxpayers can challenge regulations is significant enough, and widespread enough, to keep generating debate in the courts, legal professionals said.

“Given the obvious divide among the judges that have been considering this issue, I have absolutely no doubt that taxpayers in other circuits will continue to bring cases that raise this issue and that judges will continue to disagree as to how to resolve the issue, which is why I think eventually the Supreme Court will have to take it up,” said Kristin Hickman, a professor at the University of Minnesota Law School. Hickman wrote an amicus brief supporting CIC Services’s ability to challenge the requirement.

As a policy matter, the issue irks taxpayers and firms frustrated by needing to violate a Treasury regulation in order to get the tax assessment that would allow for the lawsuit. It also rankles Treasury defenders who see the challenge as trying to frustrate basic tax administration.

Judge Jeffrey S. Sutton, a prominent appellate judge, teed up the Anti-Injunction Act for high court review when he wrote in support of letting stand an earlier decision siding with the government.

The differing opinions from colleagues and a separate circuit court “say all there is to say about the issue from a lower court judge’s perspective,” said Sutton, a former clerk for Justice Antonin Scalia.

The Sixth Circuit appeals court declined to review the case on Aug. 28. The U.S. District Court for the Eastern District of Tennessee had previously thrown out CIC Services’s challenge and a panel of Sixth Circuit judges affirmed the district court ruling on May 22.

Circuit courts aren’t currently divided on the topic: In a 2015 decision written by then-D.C. Circuit Judge Brett Kavanaugh, a three-judge panel for the Court of Appeals for the District of Columbia Circuit ruled in line with the Sixth Circuit on a separate case involving the Anti-Injunction Act.

Critics of Treasury hoped the full Sixth Circuit would rehear the case and create an opposing circuit ruling that could entice the Supreme Court to resolve a split. Sutton questioned whether that was necessary.

“In a dispute in which the Court’s decisions plausibly point in opposite directions, it’s worth asking what value we would add to the mix by en-bancing the case in order to create the very thing that generally prompts more review: a circuit split,” he said.

“But it’s also true that a mix of all of these separate writings, and in particular a separate writing like Judge Sutton’s that suggests the uncertainty is due to ambiguities in the Court’s own precedents, is likely to get the Court’s attention—which is a big factor in whether a case is ultimately granted,” said Litman, who clerked for Sutton and former Supreme Court Justice Anthony M. Kennedy.

A dissent from Judge Amul R. Thapar, joined by six other judges, makes it more likely an actual circuit split is coming, said Andy Grewal, a professor at the University of Iowa Law School.

“It makes the position more tenable in other circuits that you can challenge tax regs before enforcement,” he said.

CIC Services argued the Anti-Injunction Act didn’t prohibit its suit because it was challenging the requirement to report micro-captive transactions, not any tax that would be assessed if it failed to report.

In a micro-captive transaction, a taxpayer or someone related to them treats a company as a captive insurance company—which typically offers risk-reducing services—in an attempt to reduce taxable income.

This was the dissenting judges’ "latest attempt to inflict death by distorted originalism on the modern administrative state,” wrote Judge Eric L. Clay in an opinion supporting the decision not to rehear the case. He argued the dissenters were motivated by policy concerns rather than a strict reading of the statute.

But Hickman said other limitations on when and how you can get into court would prevent the extreme outcomes Clay seemed to see as motivating the dissenters. For example, a lawsuit might be kicked out of court for being premature or because there are other reasons a petitioner can’t be heard.

“I don’t think allowing pre-enforcement review is going to shut down tax administration,” she said.