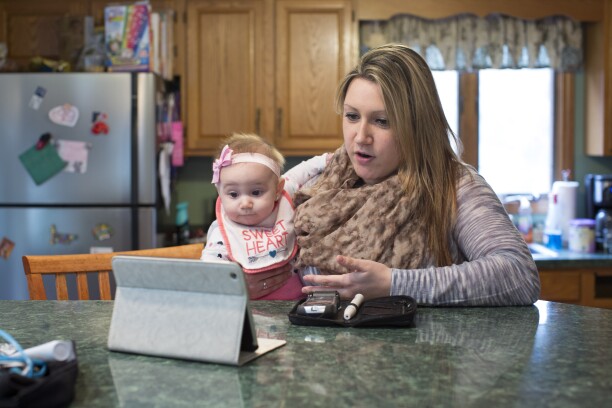 Erica Jensen, with her 5-month-old daughter, Charlee Jaques, by her side, video conferences with her doctor from her mother's home in Wilmington, Mass., in 2016.
Dina Rudick/The Boston Globe via Getty Images

A proposed government expansion of telehealth services faces an array of obstacles covering everything from how to license doctors performing telehealth to how to pay for the services.

Telehealth has primarily been offered to rural patients who don’t live near their doctor, and the proposed changes would let Medicare Advantage plans expand the service to all patients regardless of their location. Telehealth refers to any remote clinical interaction between a doctor and patient and can occur through services such as Skype or Apple’s FaceTime.

The late October proposal would take affect in 2020 and would allow Medicare managed care plans to expand their telehealth offerings and treat them as basic plan benefits instead of paying for them through discretionary funds. The rule doesn’t extend to traditional fee-for-service Medicare. Current rules restrict all Medicare telehealth coverage to a limited geographic area and primarily force patients to receive the services in a health-care facility rather than at home.

The boost in telehealth services has the potential to upend the traditional doctor-patient relationship by allowing patients more options to communicate with health providers, but confusion over reimbursements could derail the expansion.

The first two years of the expansion are likely to be full of confusion over reimbursements, Roy Schoenberg, chief executive officer of American Well, told Bloomberg Law. Boston-based American Well provides telehealth infrastructure for health insurers and hospital systems across the country.

Health-care providers are going to be uncertain if they’ll be paid for providing telehealth services, Schoenberg said.

“If you know there’s a 100 percent chance you’ll get paid for seeing a patient in person, but only a 99 percent for treating them through telehealth, you’ll favor the in-person visit,” Schoenberg said.

Providers will also have to contend with different state laws governing how medical care can be provided, Ross Friedberg, general counsel for Doctor on Demand, a San Francisco-based telehealth provider, told Bloomberg Law.

Most states, for instance, require physicians to be licensed in the states where their patients live, which could prevent a cancer patient in Wyoming getting telehealth services from an expert at the Mayo Clinic in Minnesota.

“There’s a certainly a role for the federal government to help standardize telehealth regulations,” Friedberg said.

“As long as things go well, this could demonstrate to Congress that removing some of the reimbursement restrictions for telehealth services across the Medicare program would increase quality and access for patients while reducing cost,” Sherer said.

Medicare’s telehealth reimbursement restrictions are statutory and can only be amended through an act of Congress, which is not the case with the Medicare Advantage program.

There are many ways that telehealth can be effective in long-term care settings, including through remote patient monitoring that lets providers continuously monitor patients and decrease unnecessary emergency room visits, Sherer said.

“Long-term care is somewhat uncharted territory for telehealth, but the potential opportunity is enormous,” Sherer said.

The Centers for Medicare & Medicaid Services was exceptionally broad in defining how plans could deliver telehealth services, which could mean everything from secure messaging to artificial intelligence chatbots, Nathaniel Lacktman, a health-care attorney with Foley & Lardner LLP in Tampa, Fla., told Bloomberg Law.

The definitions for what constitutes additional telehealth services is murky and slightly different from the traditional Medicare definition of telehealth, David Gray, congressional affairs manager at the Healthcare Information and Management Systems Society, told Bloomberg Law.

The new definitions were likely intended to build in some flexibility for MA plans, but could create some confusion if they clash with other parts of the Medicare program, Gray said.

The proposed boost in telehealth coverage is likely to spur new technology, and Doctor on Demand has already begun to integrate lab tests into its remote services, Friedberg said.

“In 20 years, we’ll look back and question why we sent patients with conditions like flu to a doctor’s offier to infect other patients when should have treated them at home,” Friedberg said.

There will always be a place for in-person care, but the trend is toward finding more ways to bring care into a patient’s home, Friedberg said.

Doctor on Demand contracts with health plans and large employers to provide telehealth services to their beneficiaries.

To contact the reporter on this story: in Washington at jswann1@bloomberglaw.com

To contact the editor responsible for this story: at fjohnson@bloomberglaw.com