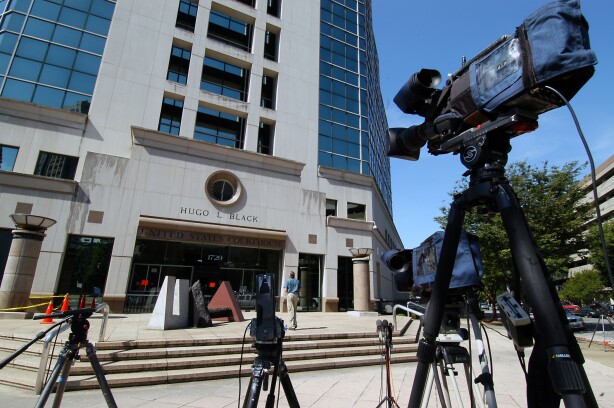 Companies that turn to the federal courts to resolve fights with rivals and customers may find themselves in limbo if the government shutdown continues beyond next week.

The system has enough money left over from fees and other sources to run through Jan. 11, according to the Administrative Office of the U.S. Courts, which supports the judiciary. After that, nonessential workers at the 94 federal district courts, and at higher courts across the country, may have to stay home even as skeleton crews show up -- without pay -- to handle matters deemed essential under U.S. law, including many criminal cases.

Individual courts and judges will then decide how to fulfill those critical functions, said David Sellers, a spokesman for U.S. Courts. He pointed to earlier shutdowns, the longest of which was the 21-day furlough that started in December 1995 and ended in January 1996. A shutdown beyond Jan. 11 would break that record.

“In the past, some courts have suspended civil cases, some have conducted business as usual,” Sellers said. “It’s really a judge-by-judge, court-by-court determination.”

A loss of funding for civil cases would exacerbate a problem that’s already made it harder for companies to get their day in court, said Russell Wheeler, a visiting fellow at the Brookings Institution and a former deputy director at the Federal Judicial Center in Washington. That problem: 119 judicial vacancies, or about 18 percent of the 677 federal judgeships.

One of the biggest pending cases is the Federal Trade Commission’s anti-monopoly lawsuit against Qualcomm Inc., set for a non-jury trial starting Jan. 4. U.S. District Judge Lucy Koh, known for her tight schedules and firm deadlines, appears committed to completing the trial by Jan. 28, and the FTC said it is expected to proceed.

“I think American companies can handle it for a while, but obviously if this is still going on six months from now it’ll be a very serious situation,” Wheeler said. If the shutdown is protracted, he said, companies may try to resolve disputes in other ways, including arbitration, if possible, taking their cases to the much larger network of state courts, which isn’t affected by the closure.

The partial government shutdown started on Dec. 22 after President Donald Trump declined to sign spending legislation without $5 billion for the border wall he campaigned on. With the president under pressure from the right to fulfill that promise and Democrats now in control of the House of Representatives, it could drag on.

Whenever the cash runs out, the courts will begin operating under the Antideficiency Act, the federal law that requires work to continue if it’s necessary “to support the exercise of Article III judicial powers,” or the resolution of cases, under the Constitution.

A Dec. 10 congressional report on the effects of shutdowns said that neither judges nor their most important staff would be subject to furlough. Essential probation and pretrial services officers also would be protected if needed to resolve cases, according to the report, which found that most courts continued to function during the 1995-96 closure. Employees would either work without pay or be reimbursed with funds designated for other services, such as training or technology, Sellers said.

Ruben Castillo, chief judge of the U.S. District Court for the Northern District of Illinois in Chicago, is ready to operate a “triage system” if the shutdown extends beyond Jan. 11.

“I will have to have a meeting with our court personnel and tell them I won’t be able to pay them. Then we’ll have to shut down civil trials,’’ Castillo said. Criminal trials will get priority, he said, because defendants, who are presumed innocent, have been waiting for the resolution of their cases. In the end, he predicted, he will lose some veteran employees eligible for retirement.

“This is not the way to run a court system,’’ he said.

The courts will need to coordinate independently with local offices of the U.S. Marshals Service and the U.S. Attorney’s Office, which are part of the executive branch’s Justice Department rather than the judiciary, Sellers said. For the cases deemed crucial, it’s up to the Marshals and the U.S. Attorneys to ensure defendants are delivered to their hearings and government lawyers appear to prosecute them, he said.

For now, many courts are taking a wait-and-see approach. Daniel Spohr-Grimes, a spokesman for the court in the Eastern District of California, said the chief judge will issue an order detailing the scope of operations under lapsed appropriations if the shutdown continues past Jan. 11.

The Justice Department has already won court orders putting some of the cases it’s involved in on pause. In the busy Southern District of New York, in Manhattan, the chief judge on Dec. 27 put a hold on all civil cases in which the government is a party. In Washington, U.S. District Judge Emmet Sullivan halted a challenge to restrictions the Trump administration imposed on immigrants seeking asylum. Sullivan, who has declared the policy unlawful, ordered the U.S. to alert him when funding is restored.

Some judges have declined to delay trials scheduled for January, including a California case challenging the administration’s addition of a citizenship question to the 2020 census.

U.S. District Judge Ellen Lipton Hollander in Baltimore on Thursday also denied a government request to put an Obamacare-related lawsuit on hold due to the partial shutdown.

“Given the potential significance of this matter to the health and well-being of the citizens of Maryland, I shall deny the government’s motion for a stay,” Hollander wrote.

To contact the reporter on this story: Erik Larson in New York at elarson4@bloomberg.net

To contact the editors responsible for this story: David Glovin at dglovin@bloomberg.net Peter Jeffrey, Elizabeth Wollman