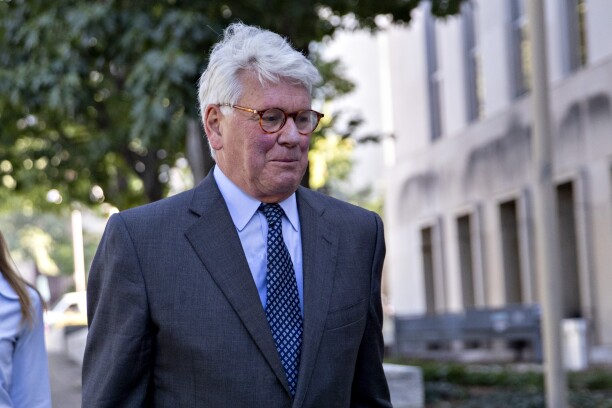 Gregory Craig’s defense team has begun presenting its case that the former Obama White House counsel didn’t scheme to mislead Justice Department officials about the extent of his work for the Ukrainian government.

Federal prosecutors on Aug. 27 finished calling witnesses and entering evidence against Craig, who is in the third week of trial on a felony false statements charge. Fifteen individuals — most of whom are, or have been, employed by Craig’s former law firm, Skadden, Arps, Slate, Meagher & Flom LLP — offered testimony for the government.

Following the prosecution’s decision to rest its case, jurors heard from Cliff Sloan, a recently retired Skadden partner who’s now at Georgetown University Law Center. He returned to the courtroom as the defense’s first witness after appearing for the government last week in the same case.

William Murphy, one of Craig’s attorneys, used Sloan to highlight emailed conversations where Craig appeared frustrated with requests by Ukrainian officials for changes to a legal report his firm was paid to create in 2012.

“I am close to telling them to pound sand and if they don’t want to publish it, so be it,” Craig wrote, referring to a prolonged back-and-forth with Ukraine’s government about the report.

After Sloan’s testimony, the defense called four character witnesses on Craig’s behalf. Among them was Brendan Sullivan, a senior partner at Williams & Connolly LLP who said he’s known Craig for 47 years, many of them while they worked at the same firm.

“My opinion is that his integrity is beyond reproach,” Sullivan said of Craig, who had an office at Williams & Connolly just 60 feet from his own.

Clinton Deveaux, a retired Atlanta Municipal Court judge, also spoke highly of Craig. “He may be the toughest, clearest thinker” about issues of ethics, honesty and forthrightness, said Deveaux. The two men met in college while working on an intercollegiate letter critical of the Vietnam War.

‘Not a Lot of Good Guys’

Prosecutors kept their their cross-examinations mostly short, asking each character witness whether they have attended Craig’s trial and were aware of any evidence in the case. But Assistant U.S. Attorney Fernando Campoamor-Sanchez did find a small window of opportunity to expand his questioning of one witness, Jessica Tuchman Mathews.

Mathews, a distinguished fellow at the Carnegie Endowment for International Peace and its former president, recounted her time spent with Craig while he served as a board member of the advocacy group.

Campoamor-Sanchez asked her whether the controversial prosecution of former Ukrainian Prime Minister Yulia Tymoshenko, which was the subject of Skadden’s report for Ukraine, was ever an issue focused on by the endowment.

Although Mathews said she wasn’t sure, she added that Ukraine’s so-called Orange Revolution was of interest to her organization. There were “not a lot of good guys” in Ukraine, she said.

Campoamor-Sanchez then fired off a series of questions, asking if she knew that Craig spearheaded a project for the Ukrainian government that was criticized by the Obama administration. Craig’s defense team eventually objected to the line of questioning after Mathews admitted she wasn’t aware of the Ukraine work.

Jury deliberations could start as early as this week depending on the length direct and cross-examination of Craig, who is expected to testify Aug. 28. However, a four-day weekend beginning Aug. 30 approved by U.S. District Court Judge Amy Berman Jackson might push the beginning of deliberations into next week.

Craig’s case has roots in Special Counsel Robert Mueller’s now-completed probe of Russian meddling in the 2016 election. A guilty verdict could land the former Skadden partner in prison for a maximum of five years.

To contact the reporter on this story: in Washington at jrund@bloomberglaw.com